This weasel, which is found across Tennessee, has the largest distribution of any mustelid in North America.

Description: A small mammal with a long, slender body, short legs, flattened head, and a long neck.  Their ears are rounded and short, whiskers are prominent, and eyes are black. Their brown tail is about half the length of the body with the end of it tipped in black. The silky, dense fur is brown above, and white below including the chin. The feet are usually brown. Males are almost twice as large as the females.

Similar Species: Least Weasel is much smaller and has a short tail without a black tip. American Mink is much larger and has dark under parts.

Habitat: Long-tailed Weasels occur in a variety of habitats, but tend to prefer woodlands, thickets, and brushy fencerows near water. They will live in old burrows of other small mammals, in rock crevices, under tree roots, or under barns where they will build their own nest made of grass and lined with mouse hair.

Breeding information: Long-tailed Weasels breed in July or August, but the gestation lasts between 205 and 337 days due to delayed implantation of the embryos after fertilization. A single litter of 1-12 (average 5-8) young are born the following April or May. The pink, naked newborns develop fur by 3 weeks. At about 5 weeks old the young open their eyes and are weaned from the mother.

Status in Tennessee: Long-tailed Weasels are uncommon in the state; they are still trapped for their fur.

Fun Facts:
•Long-tailed Weasels are very aggressive and fearless sometimes attacking animals that are much larger.
•At night the eyes of a weasel shine brilliant emerald green in the glare of a light.

Best places to see in Tennessee: Woodlands, brushy fields, or edges of both. 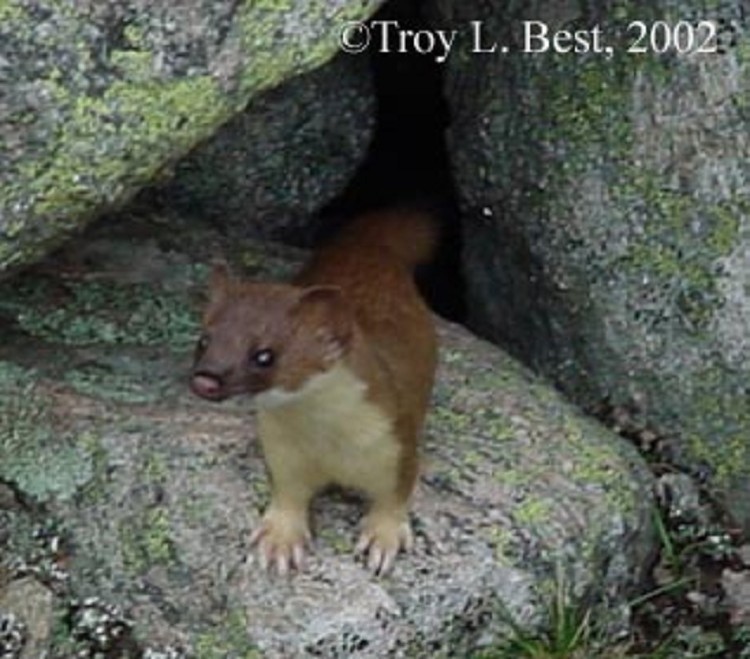