Wild Turkeys are the largest bird nesting in Tennessee.  This large-bodied, big-footed species only fly short distances, but roosts in trees at night. The historic range of Wild Turkey extended from southern Canada throughout the United States to central Mexico. The eastern subspecies occur in Tennessee.

It was a very important food animal to Native Americans and early settlers, but by the early 1900s over-hunting eliminated this species from most of its range, including much of Tennessee.  Modern wildlife management has reestablished this bird throughout its historic range and in 49 of the 50 United States.

Description: A Wild Turkey is a large, dark ground-dwelling bird.  Males are larger than females.  In late winter and spring when the male is courting females, he has a white forehead, bright blue face, and scarlet neck.  All males and some females have a tuft of modified feathers on the chest called a beard.

Domestic turkeys can look similar but have a white tip to the tail (similar to some of the western U.S. subspecies).

Nesting and reproduction: Males begin vying for females starting in late winter or early spring and attract females by gobbling. When the female appears, he puffs up his body feathers, and struts around her with his tail spread and wingtips dragging on the ground.

Dominant males will mate with several females in one season, but the female alone builds the nest and cares for the young.

Incubation: The female incubates the eggs for 27 to 28 days.

Nest: The nest is a simple depression on the ground lined with dead leaves or grass, usually placed at the base of a tree or bush and concealed in thick vegetation.

Status in Tennessee: Wild Turkey is a common to uncommon permanent resident throughout the state.  By the early 1900s populations had crashed due to unrestricted hunting, land clearing, and the loss of the American Chestnut, which was an important food source.

As a result of reintroduction efforts by TWRA, Wild Turkeys are now found in every county in the state. Winter flocks in Tennessee may exceed 400 individuals.

Best places to see in Tennessee: Found in every county in the state.

Keep Wild Turkeys Wild! Find out how you can help. 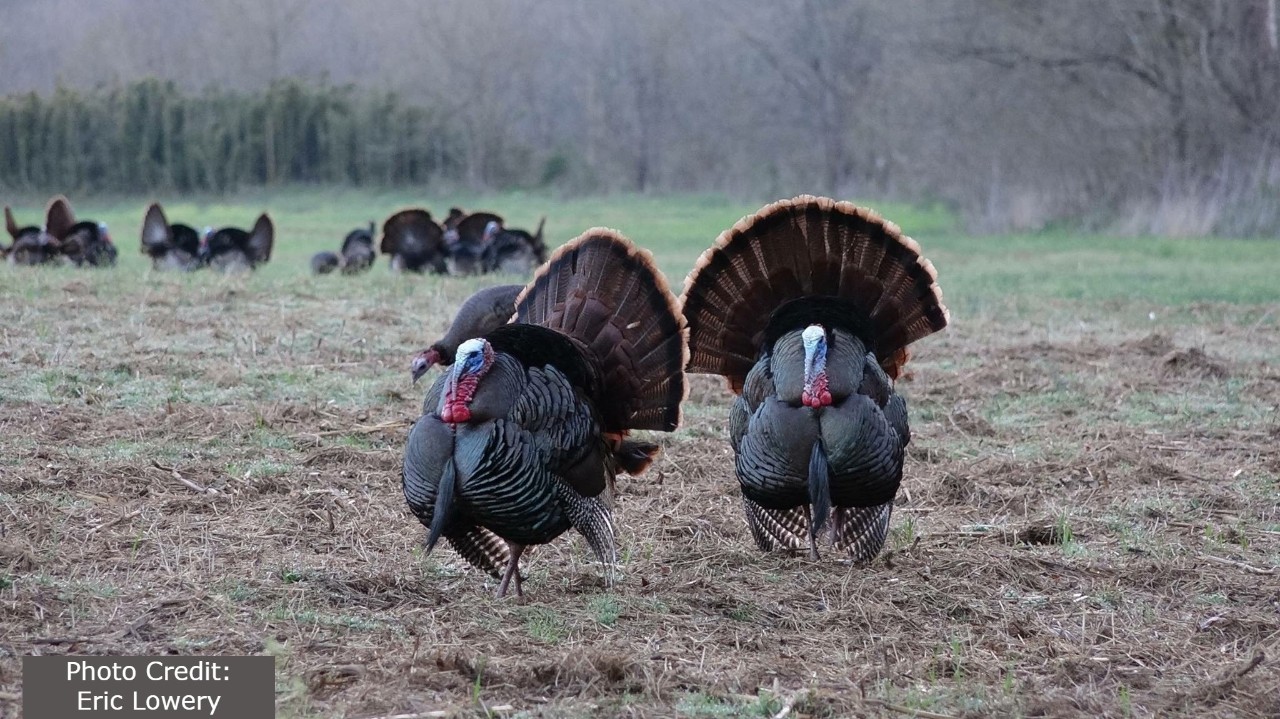 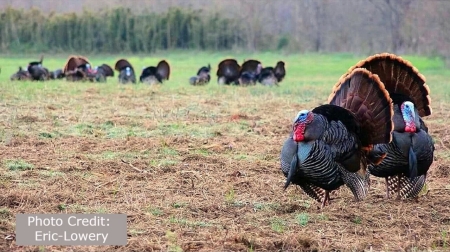 Most people enjoy observing wildlife, including wild turkeys, and what better way to see them often than to provide food to attract them to your neighborhood?  While this might seem reasonable, what seems like a harmless (or even helpful) practice is not helpful to the turkeys and usually becomes a problem, and can even become a public safety threat—if not for you, then for a neighbor.

Please Do Not Feed Wild Turkeys

Turkeys are opportunistic foragers with a very generalist diet—there’s not much that they don’t eat.  So, it is extremely rare that they cannot find enough to eat on their own.  Of course, what turkey wouldn’t pass up an easy quick meal from a bird feeder or corn pile?  But such food sources can actually be detrimental to the overall health of a turkey population and can lead to unpleasant outcomes for people in the area.

What’s the Harm of Feeding Turkeys?

Turkeys are supposed to move widely and cover large land areas while foraging throughout the day.  While feeding turkeys in residential areas, whether directly or indirectly, seems like it is helpful, repeatedly congregating turkeys in the same area leads to a build-up of droppings and unnaturally increases contact between groups of turkeys.  Such conditions produce the perfect environment for disease outbreaks and the spread of disease through a population. Further, feed that is not cleaned up regularly can spoil and mold, which leads to the production of toxic chemicals extremely harmful when ingested by turkeys.

Another problem with feeding turkeys in residential areas is that as turkeys get accustomed to being fed and seeing people, they habituate to people and lose their natural fear of humans.  For a while, this may seem wonderful because people are able to watch turkey behavior up close, even from the comfort of their own homes at times.  However, having turkeys hanging around neighborhoods eventually leads to issues with turkeys scratching up flower beds, pecking cars, and leaving droppings on drive-ways, sidewalks, yards, and porches.  Turkeys disrupt and block the flow of traffic when they congregate in roadways and intersections.  They have even been known to roost on roofs or pool patio screens. 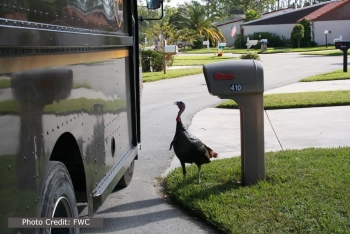 While much of turkey nuisance behavior is relatively benign, over time turkeys begin to show bold and aggressive behavior towards people—particularly children, women, the elderly, and anybody who acts fearful and timid.  These turkeys react to people (and sometimes pets) as they would a rival turkey.  Once this bold behavior is established, it can be very difficult to change.

The best way to prevent turkeys from becoming too used to people and turning aggressive is simply to not feed them and don’t let them become accustomed to living in and around people.

What Should You Do?

If you encounter wild turkeys that 1) do not move to avoid people, 2) approach people, pets, or vehicles, or 3) remain in yards or common areas loafing, TWRA recommends aggressive hazing to frighten turkeys out of these areas.  Actions you can take to frighten turkeys include:

Chasing them (without making physical contact) while doing any of the following:

Spraying them with a strong jet from a water hose

Remember to be bold with offending turkeys:  don’t let them intimidate you.  Turkeys that repeatedly challenge or attack people may ultimately have to be destroyed.  Keep turkeys wild to avoid these consequences.  It is rarely an option to trap and relocate nuisance turkeys that have developed these behaviors.

Finally, pass this information along:  share these tips with your neighbors and encourage other adults in your neighborhood to follow these suggestions, too.  Your efforts will be futile if neighbors are providing food or shelter for turkeys or neglecting to haze bold and aggressive acting turkeys as well.  It requires the efforts of the entire neighborhood to help keep wild turkeys wild!