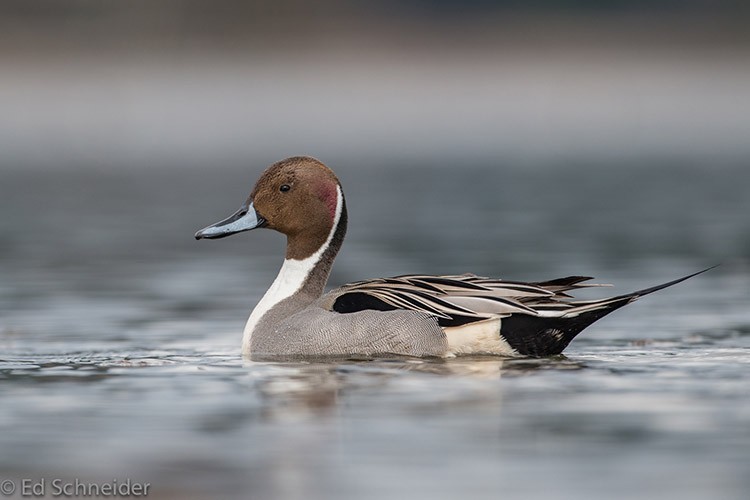 The male Northern Pintail is a most elegant dabbling duck* with its long slender white neck, and long central black tail feathers. Even the mottled brown female can be recognized by her graceful, long-necked shape.

The breeding distribution of the Northern Pintail is circumpolar. In North America, the core-nesting habitat is in Alaska and the prairies of central Canada, south to the northern Great Plains.  Northern Pintails winter from the central United States southward to northern South America. This species also breeds in northern Eurasia wintering in southern Europe, Africa, and southern Asia.

In Tennessee, the Northern Pintail is most easily found during migration with smaller numbers over-wintering in the state.

Description: The male is boldly patterned with a white chest and neck, and a white stripe extending into the side of the chocolate-brown head. It has a long neck and long central tail feathers giving it a “pintail”.

The female has a long neck, and is mottled brown overall with a plain, slightly paler, head.

Voice: The female quacks, but not as loud as a Mallard. The courting male gives a high, drawn-out whistle.

Habitat: In Tennessee, pintails are found on lakes, ponds and in flooded grain fields.

Status in Tennessee: The Northern Pintail is a fairly common migrant and uncommon wintering duck in the state. They arrive in late August and become less numerous during the winter. Spring migrants arrive by mid-February and most birds depart by late March.

Best places to see in Tennessee:  wildlife viewing areas across the state including Reelfoot Lake, Cross Creeks NWR, Tennessee NWR, and others.

*Dabbling ducks feed by tipping tail-up to reach aquatic plants, seeds, and snails. They seldom dive below the water.