Thanks to the avibirds.com team for this great video!

The Mallard is the most abundant, widespread, and familiar duck in North America.  The breeding range extends across most of Canada and the northern half of the United States, and it spends the winter where it finds open water in the lower 48 states.

The Mallard is most common in Tennessee during the non-breeding season, especially in West Tennessee, with peak numbers occurring from October through February. It is an uncommon breeding bird across the state.

Hunters routinely refer to male Mallards as greenhead ducks and to females Mallards as suzies.

The female is mottled brown overall, with an orange bill marked with black. Both sexes have red-orange legs, a mostly white tail, and a bright blue patch on the rear of the upper-wing that is bordered in white.

Voice: It's the female that gives the characteristic quack and the familiar descending laughing series of quacks. Males make a softer, rasping rab during courtship.

Nesting and reproduction: Pairing among Mallards takes place in the fall, and pairs stay together all winter. Egg laying begins as early as late February and extends through May. The male does not participate in nesting activities after incubation begins.

Incubation: The female alone incubates the eggs for 27 to 28 days

Fledging: The young leave the nest within 2 days of hatching and are able to fly in 8 weeks.

Nest: The female builds a bowl of grasses and other plant material, and lines it with down feathers from her breast. The nest is placed in a fallen log, on a small island in a marsh, or under a dense bush near water.

Status in Tennessee: The Mallard is common in winter (October through February) across the state, especially in Middle and West Tennessee. It breeds in all parts of the state, but is not common in any region. 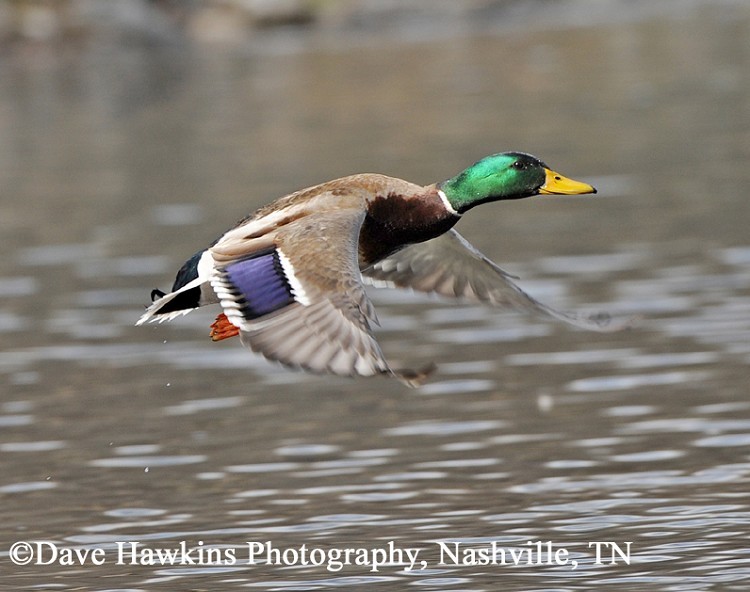 Best places to see in Tennessee: Most abundant in the state from October through February especially in Middle and West Tennessee.

Can be found at most waterfowl refuges across the state. Hundreds to thousands spend the winter in and around Reelfoot Lake.