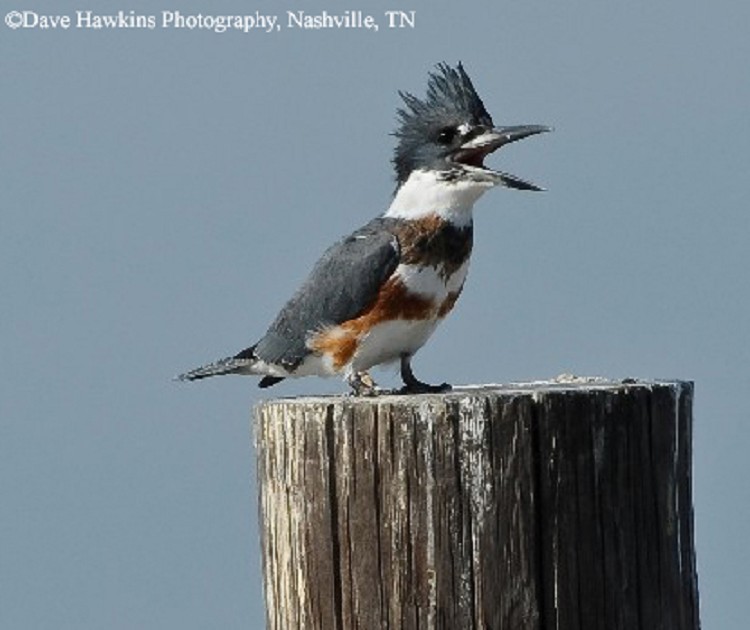 The Belted Kingfisher is one of the most widespread landbirds in North America with a breeding range that extends from western Alaska, throughout Canada and in all states but the southwestern United States.

This bird excavates nesting cavities in riverbanks, but human activity such as road building and digging gravel pits, has created additional nesting habitat allowing kingfishers to expand their range into areas without suitable natural nest sites.

The kingfisher can often be seen perching or hovering over clear open water before suddenly diving for fish.  This species winters throughout the breeding range where there is open water.  Other individuals migrate south into Mexico, Central America, and very northern South American.

Description: This medium-sized bird has a large head, large, thick bill, and a shaggy crest. The head, back, and wings are bluish; the underparts are white with a bluish chest band. Females have an additional rust colored band and rusty flanks.

Voice: The call is a loud, distinctive, raspy rattle.

Habitat: Kingfishers breed along streams, rivers, lakes, roadcuts, and quarries with earthen banks nearby for nest holes. They winter along rivers, streams, and lakes.

Incubation: Both parents incubate the eggs for 23 to 24 days.

Fledging: The young fledge at 27 to 29 days, and are taught by their parents to fish. They will remain with their parents for approximately 3 weeks and are fed by them before dispersing.

Nest: Both sexes participate in excavating the burrow in an earthen bank near water. The male does most of the digging, using his bill and pushing the dirt out with his small feet. No lining is used. The burrows may be reused, but site tenacity is weak. Burrow length ranges from 1 to 8 feet.

Status in Tennessee: Fairly common permanent resident in all counties of the state. Occurs locally wherever there is relatively clear water with small fish, and nearby vertical earth banks for nesting. The population in Tennessee, and rangewide, has been declining in recent decades.