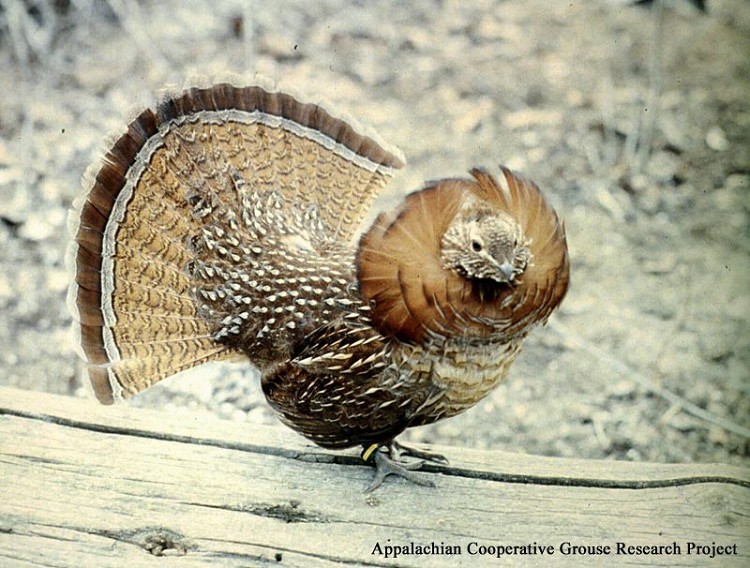 The Ruffed Grouse is a chicken-sized bird that is cryptically colored to blend in with its forested habitat.  It has the distinctive behavior of “drumming” to attract a mate.   In early spring, the male perches on a log, mound, or stone, and rotates his wings forwards and backward so fast that the air rushing into the momentary vacuum creates a miniature sonic boom! The sound is very deep and increases in tempo. This territorial display peaks in mid-April and ceases by mid-to-late May.

The range of the Ruffed Grouse in Tennessee once extended throughout East and most of Middle Tennessee. Currently, it is found only on the Cumberland Plateau and the high ridges and mountains of eastern Tennessee.  The breeding range extends from central Alaska across most of forested Canada to the northern United States, and south along the Appalachian Mountains to northern Georgia.

The Ruffed Grouse is a popular game species in Tennessee and population numbers appear to be stable.

Description: The Ruffed Grouse is a thick-bodied chicken-like bird with mottled gray and brown plumage overall, a slight crest, a moderately long, rounded tail that has a narrow dark band near the tip, and feathered legs.  Males and females look similar, but females have shorter crests and tails.

Habitat: In Tennessee, Ruffed Grouse are found in forests of mixed age. They prefer mature, predominantly deciduous forests with laurel, rhododendron, and blueberries in the understory, and patches of early successional habitat, 5 to 15 years old, nearby.

Nesting and reproduction: The female visits the drumming male to be fertilized and the male plays no further role in reproduction. Peak egg laying is in mid-April.

Incubation: The female incubates the eggs, which hatch in about 23 to 26 days.

Fledging: The young leave the nest within hours of hatching and begin hunting for insects shortly thereafter. They can fly in about 2 weeks and stay with the female until they are 12 to 16 weeks old.

Nest: The nest is in a bowl-shaped depression on the ground, usually at the base of a tree, stump, or under a bush. It is lined with dead leaves and grasses.

Status in Tennessee: The Ruffed Grouse is an uncommon permanent resident in East Tennessee and locally uncommon in Middle Tennessee.

Best places to see in Tennessee: Ruffed Grouse are more easily heard than seen. Males drum from mid-April through mid-May. They can be found in the Northern Cumberland WMA, Great Smoky Mountains National Park, and Roan Mountain.