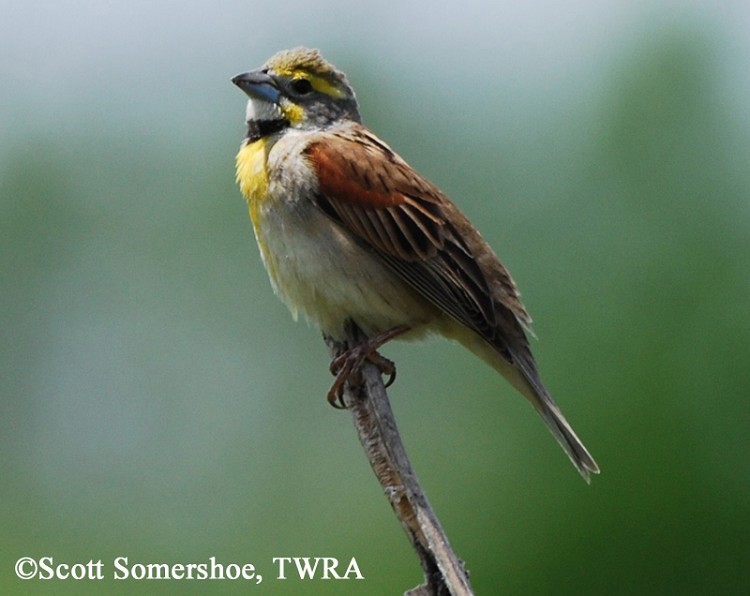 The Dickcissel reaches the eastern-most limit of its breeding range in Tennessee, and is locally common in summer only in the western part of the state.  The prairie grasslands of the central United States are its natural breeding habitat, and it has successfully adapted to some agricultural landscapes in modern times.

Local abundance of this bird during the breeding season varies greatly from year to year, and these fluctuations are thought to be related to local rainfall and habitat conditions. During migration, Dickcissels will travel in flocks of several hundred birds to their wintering grounds in the llanos of northern South America, where they form enormous flocks that can number over one million birds.

Dickcissels are usually present in Tennessee from early May until late August.

Description: The Dickcissel is a sparrow-like bird with a thick bill. The breeding male (April-August) is streaked brown and black above with a grayish neck, a yellow line above the eye, a rusty patch on the shoulder, a white chin, yellow breast, white belly, and a black V-shaped bib on the upper chest.

The female is duller and lacks the black bib. Non-breeding males look similar to the female, but have a gray bib.

Voice: The song is a series of short, dry, insect-like phrases dick dick ciss cissel. The distinctive flight-call is a low electric buzz.

Habitat: In Tennessee Dickcissels are found in large fields of native grasses, weedy fields, often with some woody vegetation, and grain or hay fields. On rare occasions, they come to bird feeders.

Diet: Dickcissels feed on seeds fallen to the ground, but also perch on stalks and pluck seeds.

Nesting and reproduction: Dickcissel males are frequently polygynous and may have more than one female in their territory. The female alone builds the nest, incubates the eggs, and feeds the young.

Incubation: Only the female incubates eggs for 12 to 13 days.

Fledging: Young leave the nest 8 to 10 days after hatching, and are only fed by the female.

Nest: The nest is a bulky cup composed of coarse weed and grass stems interwoven with a few leaves and grasses. The nest interior is lined with fine grasses, rootlets, and hair. It is usually placed in low shrubs and trees; average nest height in Tennessee is 14 inches above the ground, with a range of 6 to 18 inches.

Status in Tennessee: Dickcissels are locally common nesters in East Tennessee, uncommon to rare nesters in Middle and West Tennessee, and very rare winter residents. They usually arrive in early-May and depart for the winter grounds by late August.