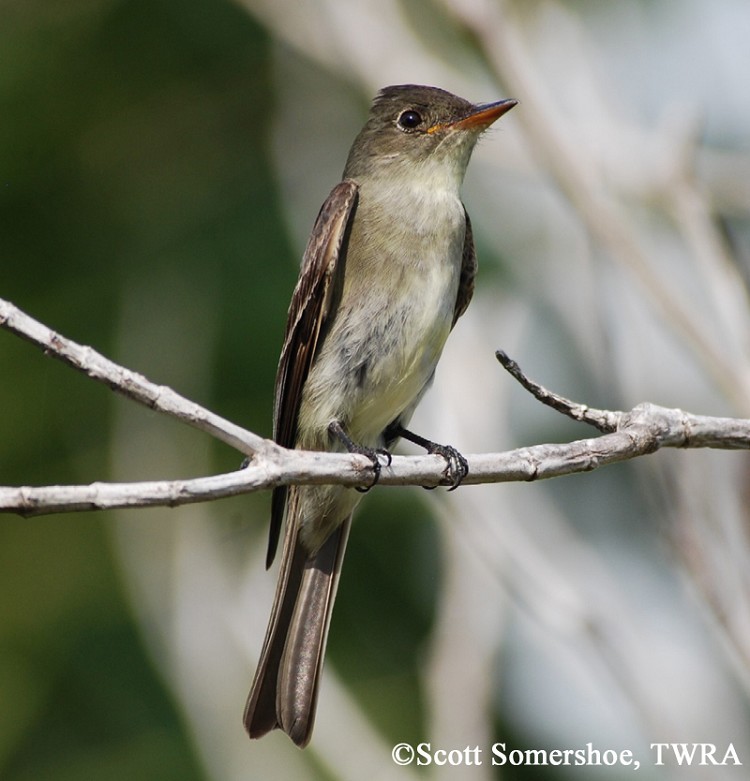 The Eastern Wood-Pewee is one of those birds that has the good manners to say its name.  The plaintive ascending and then descending pee-ah-wee phrase can be heard throughout the day during the summer in the eastern United States

The bird itself is quite inconspicuous as it hawks insects from high in the canopy.   The Eastern Wood-Pewee breeds from southeastern Canada across the eastern states and migrates to northwestern South America during the winter.

Description: This medium-sized olive-gray flycatcher is pale below with a darker wash on the breast and sides.   It has dull whitish wingbars and a dark bill with a yellow base on the lower mandible.

This flycatcher has a very upright posture and will often repeatedly return to the same prominent perch when fly-catching.

Males and females are alike in plumage.

Voice: This flycatcher says its name with an ascending and then descending pee-ah-wee.

Nesting and reproduction: The Eastern Wood-Pewee does not begin nest construction until mid-May.

Incubation: The female incubates for 12 to 13 days.

Fledging: Both adults feed the young, which fledge at 15 to 18 days.

Nest: The female builds the shallow cup-nest on a horizontal branch away from the trunk. Nest heights in Tennessee range from 6 to 45 feet, with an average of 20 feet above the ground.

Status in Tennessee: This is likely the most common flycatcher in Tennessee. It can be found during the breeding season statewide, arriving in late April and departing by early October.  The population is possibly stable in Tennessee, but it is decreasing range-wide.

Best places to see in Tennessee: This species is found in woodlands in every county in the state.