Hunting By Written Permission Only 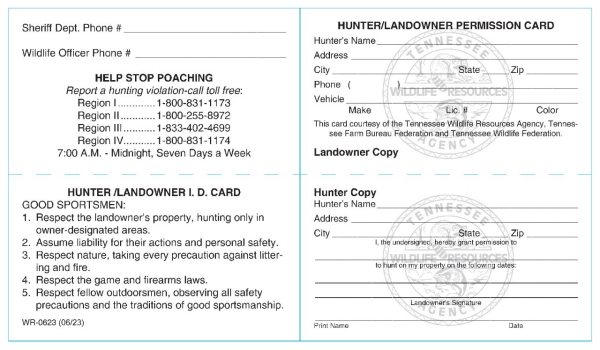 How does the "written permission" law work?

State wildlife laws have always required hunters to get permission from the landowner before hunting.

The “hunting by written permission” law (amendment to Tennessee Code Annotated 70-4-106) applies to all hunters.

Under this law, if the land is properly posted, wildlife officers or any other law enforcement officer can take persons hunting any wildlife without written permission of the landowner to court without further involvement by the landowner.

Does the hunting by permission law apply to all land?

This law does not automatically apply to all lands. The law applies only if the landowner wants it to.

By properly posting his or her land with the approved signs, the landowner has indicated that the law does apply.

How do I post my land under this law?

It is crucial for landowners to follow the posting requirements closely.  Land can be properly posted in one of the following two manners:

a. Approved signs must be placed along the property boundary at intervals no greater than 100 yards and at all major entrances.

b. Approved signs must be visible at all major points of ingress and must be accompanied by fluorescent visual markings which markings must also be placed at fifty-yard (50 yd) intervals around the perimeter of the lands being posted. Such fluorescent visual markings must be at least one inch (1”) wide and four inches (4”) long. The division of forestry, in cooperation with the department of agriculture and the wildlife resources agency, shall determine a unique universal paint color or colors, including the color blue, to be used for these property boundary markings.

The landowner must issue written, not verbal, permission slips to everyone given the right to hunt on his or her land.

The signs must have all of the wording included in the sample sign shown in the pamphlet.  Signs should be of a design and color which make them easily readable.

Signs must be a minimum of 8 inches wide and 10 inches high. Suggested colors include white, yellow, red or orange background with black print.

The signs must include the name and address of the landowner or his or her designee if someone other than the landowner is authorized to give hunters permission to hunt.

Where can I get these special signs?

Landowners may produce their own signs as long as the design meets the approval of the Tennessee Wildlife Resources Agency, or they may have them manufactured by a sign company.

Will my family have to carry written permission slips to hunt on my land?

No. The landowner, the owner’s dependents or the person in possession or control of the land and his or her dependents are not required to carry written permission to hunt.

All other hunters must carry the written permission of the landowner with them at all times.

What are the penalties for hunting without written permission on properly posted lands?

Should someone be caught trespassing on properly posted land, an affidavit from the landowner or the person in possession or control of such lands stating that the property on which the violation occurred was properly posted in accordance with the provisions of this section shall create an inference that such lands were properly posted.

Violation of this law is considered a misdemeanor and may be punishable by fine, imprisonment or both, and possible license revocation.

Hunting by Written Permission Only law

It shall be unlawful for any person to hunt, take, chase, trap or kill any game upon lands posted with signs approved by the Tennessee Wildlife Resources Agency bearing the language “Hunting by written permission only” and bearing the name of the landowner or the person in possession or control of such lands, without having first obtained the written permission of or be accompanied by the landowner or person in possession or control of such lands, and having authority from the owner to give such permission.

Every person who hunts, takes, chases, traps, or kills any game on such lands shall have his written permission in his immediate possession at all times and shall display the same upon demand of an officer of the Wildlife Resources Agency, a sheriff, or other peace officer charged with the enforcement of the laws of the state.