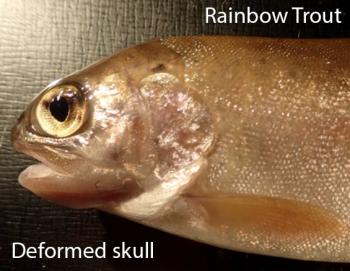 What is Whirling Disease?

Whirling disease is a condition caused by a microscopic parasite, Myxobolus cerabralis, that affects trout and salmon species.  Native to Europe, whirling disease was first discovered in the United States in Pennsylvania in the 1950s.

The disease has since continued to spread and can now be found in numerous states including Tennessee, Virginia, North Carolina, West Virginia, and most northeastern and western states.

Once introduced into the water, the parasite infects a common mud-dwelling worm found in lakes and streams.  The parasite multiplies within the worm and is eventually released into the water where it drifts until it comes into contact with a trout.

It then infects the trout’s nervous system, consuming the fish’s cartilage and skeletal tissue.  Trout with whirling disease may develop a black tail, deformities in the head and spine, or display “whirling” or erratic tail-chasing behavior.

Although an infected trout may not always die directly from the disease, it can affect their ability to swim, eat, and escape predators. Once the fish dies, the parasite is then released back into the environment, and the cycle starts over.

Other organisms such as humans, mammals, and reptiles cannot be infected.  Eating an infected fish is not known to cause any harmful effects to humans or pets.

Fish in Tennessee that are susceptible to this disease include Brook Trout, Rainbow Trout, and Brown Trout.  Lake Trout have only become infected under laboratory conditions.

Brown Trout (native to Europe, where the disease originated) can become infected and carry the disease but are less susceptible to the clinical symptoms (whirling behavior, black tail, etc.) of whirling disease unless heavily infested.

Rainbow and Brook trout are more susceptible to the disease.

Research has found that the age of the fish at first exposure to the parasite is important to the survival of the fish.  Adult fish can contract the disease, however newly hatched fish are highly susceptible to the symptoms of whirling disease.

Currently, there have been no confirmed cases of whirling disease in the state of Tennessee.

However, the parasite that can cause whirling disease has been confirmed in the North River, Doe River, and South Holston and Watauga tailwaters. Annual routine testing currently indicates that all TWRA hatchery facilities are disease free.

Tennessee Wildlife Resources Agency biologists will continue to collect trout across the state to determine the parasite distribution and any population impacts.

No negative impacts have been observed to date on the Doe River or South Holston and Watauga tailwaters.  However, there is a concern for potential impacts in areas such as wild Brook Trout populations.

There is no known cure to rid whirling disease now that it has been established, so the best way to protect Tennessee’s many trout fisheries is to prevent it from spreading.

What can you do to prevent the spread?

ANGLERS! TWRA in partnership with local fly-shops, the U.S. Forest Service and Trout Unlimited, are managing wader cleaning stations at multiple locations across East Tennessee to help prevent the spread of whirling disease and other non-native aquatic species.  Stop by and clean your waders to help protect your waters!