Efforts in Reviving Trapping in Tennessee

By Amy Snyder-Spencer and Daniel Stanfield

Trapping is one of the earliest traditions, dating back to the first expeditions by explorers into what is now the state of Tennessee.

The Tennessee Wildlife Resources Agency has been part of renewing a spark of interest in our trapping heritage by offering trapper education courses throughout the state. Trapper education welcomes new, inexperienced or seasoned trappers to a two-day, hands-on session to learn about responsible, ethical trapping. The Tennessee Trapper Education class is a voluntary program that is available in all four TWRA regions. The curriculum includes, but not limited to, first-hand activities such as: running a live trap line, trap modifications, snaring, set marking and fur preparation.

Trapping regulations are highly governed in Tennessee and across the United States to ensure that trapping is safe, effective and humane. Modern-day trapping is essential for the establishment of new animal populations. Trapping is used to survey animal populations and prevent property damage in urban, agricultural and forestry areas.  Modern-day trapping can be used to control disease and to protect fragile ecosystems. The trapping class follows the International Association of Fish and Wildlife Agencies (IAFWA) Furbearer Management Practices, and the course teaches trappers to be responsible and ethical.

Here is an example of a class schedule taught in West Tennessee by TWRA Region I big game and furbearer biologist, Daniel Stanfield. 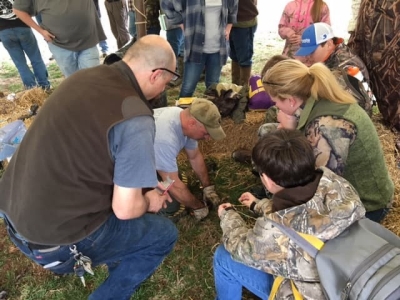 The two-day course begins in a classroom with an introduction to trapping, and the role trapping has played in our North American heritage. It is essential for students to understand the historical role of trapping and the problems that trapping is facing in today’s society.

Understanding the past conflicts with trapping encourages the students to learn Tennessee’s trapping laws and regulations. Instructors discuss the terminology of trapping, legal and illegal traps, and the various ways to set traps.

Following the introduction, students move outside to run a live trap line. This activity gives students a perspective on how traps are commonly used in a variety of habitats.

It also allows students the opportunity to safely release non-target species that they may catch on the trap line. By running a live trap line, students have the opportunity to observe land sets, water sets, and snares set by experienced trappers before returning to the classroom. Instructors go into detail about the different trap sets with the participants and analyze the details of each set.

Land sets are taught by explaining the various types of trap placements, such as dirt-hole and flat sets that are the most common used for coyotes, bobcats and foxes. Students learn how to identify the most desirable places to set traps since the location of a trap is the most critical factor in catching the target species.

Students also have the opportunity to learn about additional land set methods such as, but not limited to, enclosed foothold traps, species-specific traps and commonly known as DP or dog proof traps. The dog proof traps target raccoons and is an excellent way for the younger trappers to start running a trap line.

Instructors advise the students on the proper usage of baits, lures and urines at the set location. They discuss options for using these alone or in combination to trap furbearers since each one triggers a different seasonal response from the target animal.

Snares have an advantage over water and land sets since they work in changing weather conditions such as rain, snow and rising or falling water.  They work 24 hours a day, seven days a week. 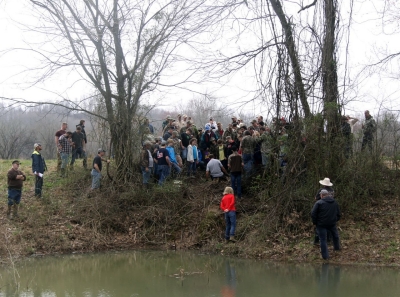 The second day begins with rerunning the trap line and letting the students participate in the trapping.  Students get to remove animals from the traps and reset traps.

The second day is always a more hands-on experience for the students, and it is an opportunity to resolve any unanswered questions in detail.  Students finish the day with instructions on how to skin and prep a fur for selling it.

The easiest part of trapping is the actual setting of the traps. The most challenging part is the proper fur handling techniques that are involved in getting the finished product ready for the sale.

Some trappers choose to have their pelts professionally tanned for home décor or made into garments by a furrier. The instructors inform the students on how to utilize all parts of the animal. The fur industry can use the fur, and the meat can be prepared into meals.

The skulls and other bones are great for educational purposes in schools. Glands are used in some health and beauty products.

Trapper education is a hands-on class with a wealth of knowledge and instruction that provides everyone from beginners to seasoned trappers something to take home.  Students can apply their knowledge to their trap line to preserve the tradition as an ethical, legal trapper in Tennessee.

Check out some other pages: