What can Browns (Trout) Do for You? 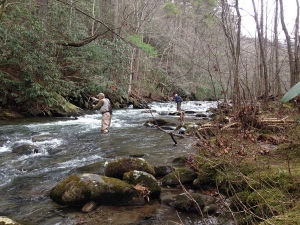 If rainbow trout are ballerinas, brown trout are krump dancers.

If rainbow trout are opera singers, brown trout are rappers, for mature audiences only.

You get the drift ... brown trout are rough and tough. Whether due to ferocity, or size, big browns are Tennessee's ultimate trout fishing trophy.

"I call rainbows panty waist fish," said Nischan, who actually loves all trout. However, he places brown trout on a pedestal all their own.

Frank Fiss does the same. He is an Aquatic Conservation Coordinator for the Tennessee Wildlife Resources Agency. Prior to his current position, he was Streams Program coordina­tor since 1995. He holds a master's degree in wildlife & fisheries. He co-authored Tennessee's most recent Trout Management Plan that will guide TWRA fisheries managers through 2016. Clearly, Fiss is an expert in his field, but most importantly, he is an avid fisherman who loves trout.

Fiss agrees that the brown trout is at the top of the Tennessee trout angler’s food chain … figuratively speaking that is.

"There is potential for them to grow much larger than rainbows," said Fiss. "Also, many anglers think that browns are harder to catch. I am not so sure this is true but the percep­tion persists."

"Studies have shown that once brown trout reach 14 inches they become piscavores," said Nischan. “That means they feed almost exclusively on other fish rather than insects."

Most folks in the trout fishing net­work know that neither rainbow trout nor brown trout are native to Tennes­see. They are transplants. Rainbow trout came from their native waters in the Pacific Northwest early in the 20th century. Many were carried on horseback into the high mountain streams of the Great Smoky Mountains. However, biologists soon discovered rainbows would thrive in a variety of coldwater streams all across the state. Fiss writes in the management plan that intensive rain­bow stocking efforts "defined trout management during much of the 20th century."

Brown trout came to America from across the ocean. They are na­tive to Europe and Asia. They have longer life spans and growth rates. In spite of their popularity and poten­tial for growing larger, they have not been stocked nearly as much as rainbows.

Currently brown trout comprise only 11 percent of the trout stocked by TWRA versus 8 l percent rainbows.

"That surprises me," said Nischan.

Fiss said the difference basically comes down to a matter of dollars and cents.

"Rainbows can be reared much more efficiently," he said. "It would be much more costly to raise browns to 9-10 inches. Browns are stocked in locations where we expect them to survive multiple years. This gives them the best chance of reaching decent size. Since many of the places we stock don't hold stocked fish year-round we stock those with larger rainbows (hence the large dif­ference in numbers stocked)."

Nischan said he wishes they could stock more brown trout, even if he had to pay higher license fees.

"I would, but I don't know how many other people would," he said. "Only the Dale Hollow National Fish Hatchery is producing browns, and due to the timing of available eggs, they are at maximum capacity," Fiss added. "We have a history of problems with growing large quantities of browns at our state hatcheries, so we primarily stick to rainbows."

The Tennessee state record brown trout was caught 20 years ago. Will there ever be a larger one taken, and if so, where?

Fiss simply said, "It could be, I suspect it will come from a tailwater that has trout habitat in its receiving reservoir."

Nischan says if he had to pick one stretch of water for big browns, "Right now I'd go to South Holston for size and numbers. I think the Caney Fork is going to catch up in the future, especially depending upon TWRA's future management efforts."

Both agree that a new state record brown, if it comes, will most likely be caught on a fish imitation of some sort, like a jerk bait, or even live bait.

"It will be caught on spinning tackle," said Nischan. "Mostly likely a jerk bait. I like the Yozuri jerk baits in rainbow trout color. Using fluorocarbon line or leader is going to help."

Every fly fisherman in the state just winced. Fiss and Nischan agree, however, that fly fishermen are at a serious disadvantage when it comes to the chances of catching a new state record brown trout. Again, big brown trout don't feed as much on bugs as they do other fish ... big fish! And fly fishermen simply have a more difficult time presenting "big fish" imitations.

Nischan says however that fly fishermen shouldn't ever rule out the possibility. Fishing for potential record browns, he suggests, "Use big streamers, something like a zoo cougar ... that's a popular pattern. Browns want something big which means you'll probably need a 7 to 9 weight rod."

Nischan says that unlike rain­bows, big brown trout are more likely to orient to wood structure ... fallen trees and undercut banks. And your chances of catching one are bet­ter if the water is slightly stained.

"When I was a kid I'd love thunderstorms that would just barely muddy up the water," he said. "I'd tie on some sort of big 'thumpin" bait, head for the river and throw at every tree and undercut bank I could find."

Of course a new state record isn't the only "trophy catch" cruising Ten­nessee waters. TWRA has its Tennes­see Angler Recognition Program (TARP) that provides special recog­nition for anglers who catch qualify­ing fish of minimum lengths. It takes a 26-inch brown trout to qualify for a TARP Award ... and there are fewer brown trout award holders than just about any other species.

"The TARP limit for browns was based on the opinion of our stream biologists who had handled thou­sands of brown trout in tailwaters and streams," said Fiss. "We thought that was a fair trophy length. It is fair to say that the 26-inch brown is one of the more challenging TARP fish. Conversely, now that we are stocking brook trout in tailwaters, the 10-inch brook trout will be easy to achieve in the right locations. One aspect of the program is to encourage anglers to try new waters. The chal­lenge isn't always catching the fish, sometimes the bigger challenge is traveling to a new destination at the right time of year."

Nischan says he believes there is new a state record brown trout com­ing in Tennessee.

"I've seen one swimming in the Caney Fork that wouldn't go 28 pounds, but he's not far from it," he said. "One problem is brown trout spawn in vulnerable shallow area areas where they're easy to see and some fishermen take advantage of that. I think if we leave the spawners alone, we'll do ourselves a lot more good in the long run."

It's been no secret that TWRA, like other states agencies, are under severe budget constraints. What impact could that have on the state's brown trout program')

"Since the browns are already limited in number and they are pro­vided by Dale Hollow National Fish Hatchery, it's not likely that further reductions in TWRA's budget would affect browns," said Fiss. "For rela­tively little money, browns provide a lot of trophy potential and fishing diversity."

And a lot of fishing fun for what Nischan calls these "grumpy old men" of Tennessee's cold water streams.

As you might have heard in a commercial for a well-known ship­ping company, "What can brown do for you?"

Richard Simms is a former TWRA Wildlife Officer and photographer. He is now a professional journalist and fishing guide. You can learn more and check out the photo galleries at www.ScenicCityFishing.com.