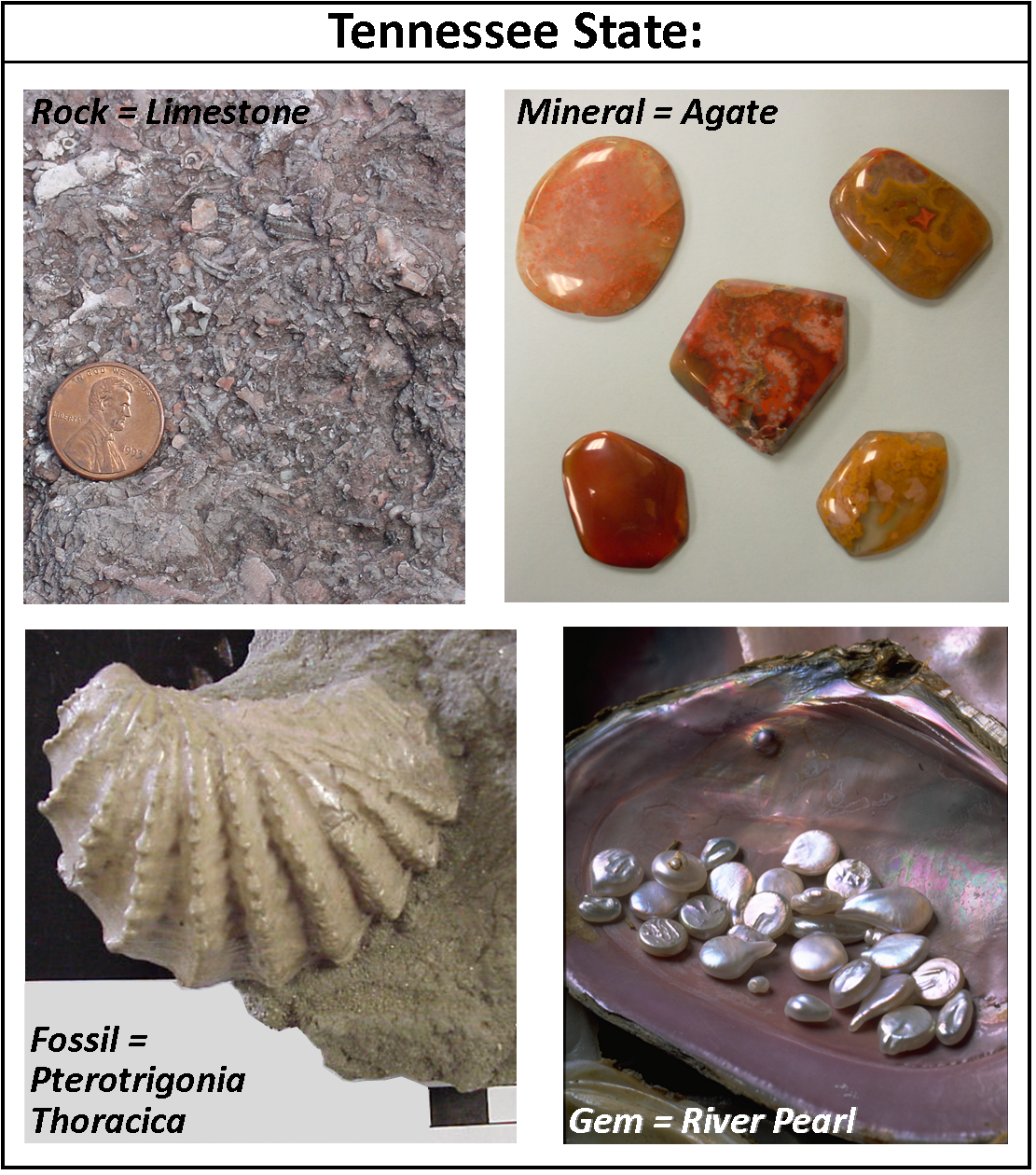 The Tennessee Blue Book describes these state symbols as follows:

Limestone, found just about everywhere in Tennessee, was designated the official state rock by the General Assembly with Public Chapter 42 in 1979. Tennessee marble, as the metamorphic version of limestone is known, is widely used in public and private buildings.

Agate is the official state mineral, as designated by Public Chapter 30 of the 106th General Assembly in 2009. Agate, a semiprecious gemstone, is a waxy, cryptocrystalline variety of mineral quartz in which the colors are present in bands, clouds, or distinct groups. On March 5, 1969, the General Assembly, in adopting House Joint Resolution 42, declared agate as the official state rock. However, the designation was changed by the General Assembly in 2009 to state mineral because stone, rock, and mineral were used interchangeably in the original resolution, and the Legislature wanted to correct this discrepancy.

Pterotrigonia (Scabrotrigonia) thoracica is the official state fossil, as designated by House Joint Resolution 552 of the 100th General Assembly in 1998. Tennessee was the 38th state to designate a state fossil. Pterotrigonia (Scabrotrigonia) thoracica (nicknamed “Ptero”) was a Cretaceous bivalve found in the Coon Creek Formation of West Tennessee. It was a wedge-shaped, shallow-burrowing suspension feeder that inhabited the marine clayey-sand ocean floor that was West Tennessee 70 million years ago. Shells of “Ptero” are preserved unaltered in great abundance and are easily recognized by collectors. The associated ocean floor inhabitants were diverse and included other bivalves, snails, squid-like animals, worms, sponges, corals, crustaceans, sharks, fish, turtles, and marine reptiles. “Ptero” now is extinct. In fact, the extinction event that was responsible for the demise of the dinosaurs 65 million years ago may have contributed to the demise of Ptero (Scabrotrigonia) thoracica. Only the genus Neotrigonia, with five species, has survived to the present and is found only in the Pacific Ocean, most commonly near New Zealand.

The pearl, taken from mussels in the fresh water rivers of the state, is the official state gem, as designated by 1979 Public Chapter 192 of the 91st General Assembly. During the years between 1882 and 1914, beautiful pearls were taken from many of the state’s streams and rivers, from the Pigeon and Holston in the east to the Forked Deer and Obion in the west. The Caney Fork in Middle Tennessee was noted for its pearl-bearing mussels, and “pearling” was a favorite sport for young people on Sunday afternoons at the turn of the century.

Tennessee river pearls are of all colors and they are “natural” as the mussel made them—all pearl, all the way through. They have been found in various shapes—spherical, pear-shaped, and baroque or irregular.

After World War I, dams were built on many of the rivers, and the mussels lost their swift and shallow shoals. Also, the waters became more toxic and pearling became unprofitable. Today, pearling exists as a by-product of shell harvests which supply the cultivated pearl industry of Japan.

Tennessee River pearls are among the most beautiful and durable in the world. At Camden in West Tennessee, these river pearls are collected and crafted into rings, cuff links, stick pins, and other jewelry. The historic Tennessee River Freshwater Pearl Farm and Museum located in Camden, Benton County, is the official site of freshwater pearl culturing in the state, as designated by 2004 Public Chapter 506 of the 103rd General Assembly.