The sheet-like, crinoid grainstone deposits of bedset C indicate unconfined deposition, perhaps on the more distal, lobe portions of a submarine fan.  The unit marked with the white star can be traced for approximately 750-meters along these roadcuts from Section A1 Northwest Part to Section D3; it may correlate with unit C of Sections H, G, and C.

Channel-fill B has a minimum of 8-meters of erosion relief.  The four major, inclined, crinoid limestone units change facies up dip from grainstone to pack-/wackestone.  Internal stratification of units 1 and 2 onlap their respective basal erosion surfaces, an indication of vertical accretion, see Sections Detail D2-1 and Detail D2-2.

Channel-fill D has a gently inclined, 4-meter high, eastern margin and a broad, flat base extending west for some 200 meters, which results in a minimum aspect ratio of 50:1. Siliciclastic mudstone with dispersed crinoid grains comprises the majority of the fill with crinoid/bryozoan pack-/wackestone being concentrated on the gently inclined margin and immediately above the basal erosion surface.  Some (even much?) of the “non-channelized” siliciclastic mudstone with dispersed crinoids grains may well be composed of just such channel-fills, their identification being hampered by limited exposure widths of high-aspect geometries and homogeneous mud-rich fills.

The sheet-like deposits of bedset C are present at the top of this roadcut as is the marker white star unit.

Roadcut Section Detail D2-East is an enlargement of the eastern end of Section D2 in order to better show the bedding characteristics of the major grainstone units of Channel-fill B.  All these four grainstone units thin updip onto their respective basal erosion surfaces and extend updip for distances ranging from 70-meters for unit 1 to 8-meters for unit 3.  The characteristic pattern of the internal stratification in these grainstones is onlap of the underlying erosion surface; this is especially well developed in units 1 and 2.  Furthermore, in units 1 and 2 the internal stratification of the overlying siliciclastic mudstones appears to be essentially parallel or concordant with the respective basal erosion surface.  These stratification patterns suggest:  1) initial deposition of grain-rich facies by vertical accretion starting at the base of the channel and subsequently onlapping up onto the margin followed by 2) suspension settling of a siliciclastic mud-rich facies by suspension settling that uniformly mantled the underlying material.  The erosion surface that marks the termination of deposition in Channel-fill B appears to have removed the upper parts of the westward extensions of these mantling, suspension-settling deposits. 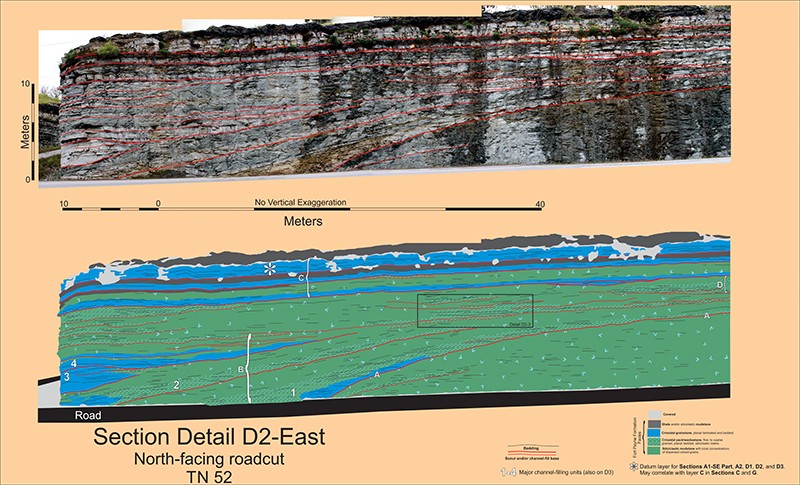 Section Detail D2-1 shows the somewhat complicated pattern of facies present at the downdip end of grainstone unit 1 of Channel-fill B.  Crinoid grainstone is overlain by crinoid packstone which is in a lateral facies relationship with interbedded crinoid packstone and siliciclastic mudstone.  All of these facies have been partially to largely dolomitized.  The internal stratification of these grain-rich units clearly onlap the basal erosion surface A and, furthermore, these units dramatically thin updip onto erosion surface A.

Section Detail D2-2 shows the facies present at the downdip end of grainstone unit 2.  The distal crinoid grainstone has a lateral facies relationship with the updip crinoid packstone.  This grain-rich fill thins updip onto the underlying erosion surface.  Furthermore, the internal stratification of the packstone defines four separate units which sequentially onlap the basal erosion surface.    Perhaps the most interesting strata patterns are found within the crinoid grainstone and which define four, sigmoidal deposits that decrease in size up and to the left and which are separated by thin, siliciclastic mudstone interbeds.  They suggest highly localized, lateral accretion toward the channel axis.  However, vertical accretion, as indicated by the onlap pattern of the packstone units, was the primary deposition mechanism.

Section Detail D2-4 depicts a relatively steep-margin with it overlying channel-fill that is present several meters below the prominent erosion surface A in the underlying siliciclastic mudstone and which disappears also within several meters, see Sections D2 and Detail D2-East.  This is a good example of the difficulty in identifying channels filled with the same lithology as the substrate into which they are cut.  However, in this case the basal fill consists of crinoid packstone, perhaps wackestone that has an interfingering or facies relationship with the overlying siliciclastic mudstone.  In addition, immediately above the packstone is a siliciclastic mudstone with a much higher concentration of dispersed crinoid grains than present in the standard of typical siliciclastic mudstone.  This facies relationship suggests deposition from a sediment gravity flow.

Section Detail D2-5 shows a series of crinoid packstones that onlap a steep portion of the prominent erosion surface A in the middle of Section D2.  This sequence is interpreted to be a channel-fill of unknown western extent.  It is likely that the upper contact of unit 5 has a facies contact with the immediately overlying siliciclastic mudstone.  Again, this is most likely high aspect ratio channel-fill, similar in geometry to that of unit D.

Roadcut Section D3 is perpendicular to and at the eastern end of Section D2.  Grainstone units 3 and 4 of Channel-fill B are inclined down to the south in this section.  In addition, grainstone unit 4 has locally eroded down into the underlying unit 3.  The sheet-like deposits of unit C as well as marker unit white star are present at the top of the section.

Roadcut Section D4 is across the private road approximately 15-meters east of the eastern end of Section D2 and faces TN52.  This very small and short roadcut exposes the distal, basal layers of Grainstone unit 3 of Channel-fill B which is so prominent in Sections D2, Detail D2 East, and D3.  In Section D4 the constituent grainstone layers are separated by siliciclastic mudstone interbeds that are not present in any of the other sections containing Grainstone unit 3.  Furthermore, the basal such layer, (letter A) records a dramatic, incremental, lateral facies change from crinoid grainstone to siliciclastic mudstone over no more than 2.5-meters, the distance between samples 2 and 5 in Section D4.  This horizontal, lithologic variation exposed layer A makes the most compelling case for a facies change from grain- to mudstone at the base of channel-fill clinoforms of all those identified in these TN52 roadcuts.   Observe similar lithologic variations in layers B, C, and D which also can be interpreted as horizontal facies changes similar to that present in layer A. 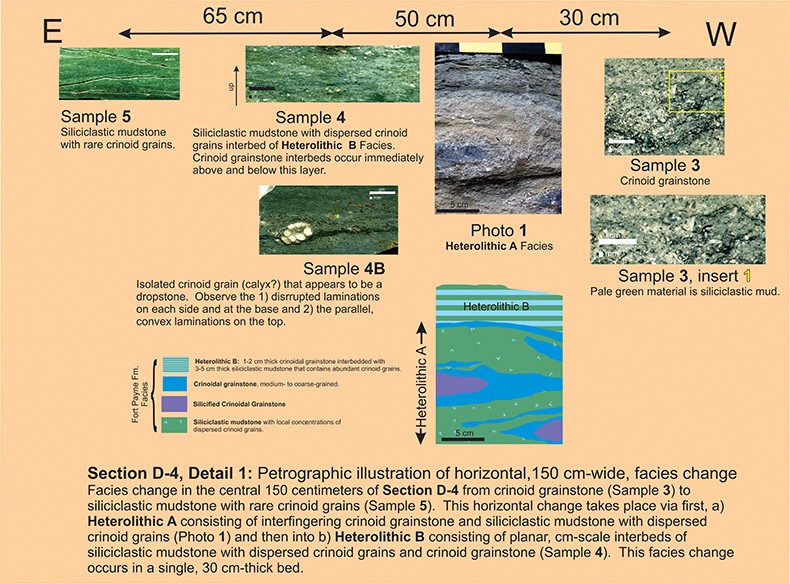 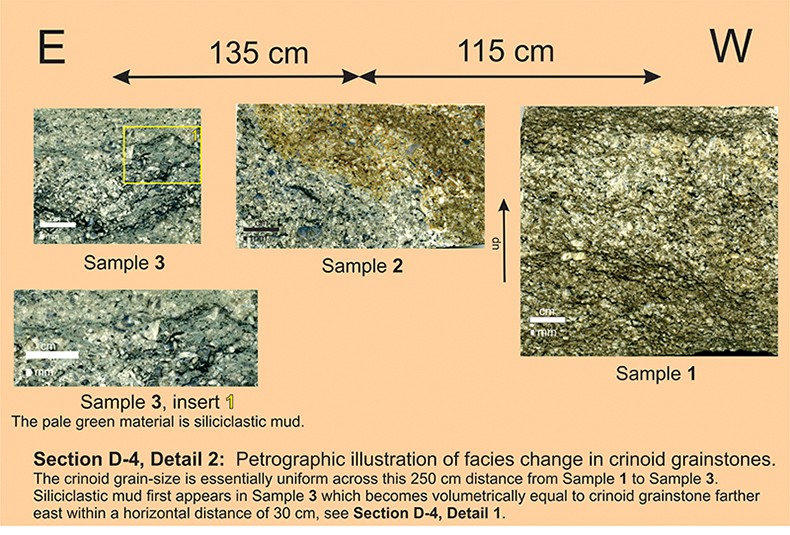