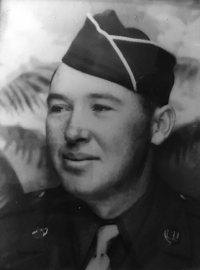 NASHVILLE – Tennessee Gov. Bill Lee and Department of Veterans Services Commissioner Courtney Rogers recognize the service and sacrifice of U.S. Army Private First Class William Delaney of Kingston, who was killed on November 22, 1944 during World War II. The Roane County native served with Company A, 1st Battalion, 22nd Infantry Regiment, 4th Infantry Division when his battalion engaged with German defenders near Grosshau, in the Hürtgen Forest in Germany. Delaney’s foxhole was struck by an enemy artillery shell and he could not be medically evacuated. He was 24-years-old.

Delaney was one of hundreds of soldiers still missing in the Hürtgen Forest by the close of the war in 1945. The American Graves Registration Command (AGRC) attempted to recover Delaney’s remains from 1947 to 1950 but was ultimately unsuccessful. In 1947, a local citizen discovered a set of remains in the Hürtgen Forest and turned them over to the AGRC. After unsuccessful attempts at identification, the remains were buried as X-5425 in Neuville, today known as the Ardennes American Cemetery.

In June 2017, the Department of Defense POW/MIA Accounting Agency (DPAA) disinterred X-5425 after military records and AGRC documents suggested the remains may be that of Delaney. Experts from the DPAA and the Armed Forces Medical Examiner System used DNA analysis and other evidence to identify the remains. On December 17, 2018 the remains were confirmed as Delaney.

“After more than 74 years, William Delaney will finally return home to Tennessee,” said Lee. “This young soldier’s bravery and sacrifice should always be remembered, and I’m glad we can honor him and his family today."

“Finally, Private Delaney will be laid to rest in Tennessee, under a headstone with his name, in the same cemetery where his parents are laid to rest,” Rogers said. “We extend our deepest condolences and support to his family and look forward to welcoming this Tennessee hero home.”

The dignified transfer of remains will occur on Wednesday, May 22, 2019 at McGhee Tyson Airport in Knoxville at 6:57 p.m. (EDT). Media planning to attend the arrival should gather at 6:30 p.m. at the Information Booth in the lower level of the airport terminal. Contact Becky Huckaby at 865-670-3854 with questions.

Delaney will be laid to rest on Monday, May 27, 2019. Funeral services will be held at Young’s Chapel Cumberland Presbyterian Church at 1705 Lawnville Rd. in Kingston beginning at 2:00 p.m. (EDT). Questions regarding arrangements can be referred to Kyker Funeral Home at 865-376-6531. Graveside service will follow immediately at Lawnville Cemetery in Kingston at 1213 Lawnville Cemetery Road.

Lee has declared a day of mourning from sunrise to sunset on Sunday, May 26, 2019 in honor of Private First Class Delaney’s ultimate sacrifice.