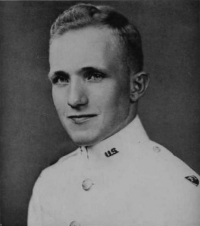 NASHVILLE – Tennessee Gov. Bill Lee and Department of Veterans Services Commissioner Courtney Rogers recognize the service and sacrifice of U.S. Army Captain Rufus J. Hyman of Memphis, who was reported missing July 30, 1950 while serving in the Korean War. The Central High School graduate was assigned to Company A, 1st Battalion, 34th Infantry Regiment, 24th Infantry Division and was engaged in combat actions against the North Korean People’s Army when he went missing. Hyman was 23-years-old.

In July 1951 a Search and Recovery team with the American Graves Registration Service Group recovered remains where Hyman was last seen. The remains were designated X-1575 Tanggok. After unsuccessful attempts at identification, the remains were sent to the National Cemetery of the Pacific, known as the Punchbowl, in Hawaii and buried as Unknown X-1575. In 2017 X-1575 was disinterred and scientists from the Defense POW/MIA Accounting Agency (DPAA) and the Armed Forces Medical Examiner System used DNA and other evidence to identify the remains as Hyman. He was successfully identified on February 20, 2019.

"Rufus was a West Point graduate who served his country courageously,” Lee said. “The Hyman family finally has the closure that they deserve, and we join them in pausing to remember this Tennessee hero as he is laid to rest in the Arlington National Cemetery."

"Captain Hyman will be forever remembered for his service to our country,” said Rogers. “We will take this moment to reflect upon the ultimate sacrifice he made for his country 69 years ago.”

Hyman will be interred at the Arlington National Cemetery in Virginia on October 9, 2019 at 1:00 p.m. EDT.

Lee has declared a day of mourning from sunrise to sunset on Wednesday, October 9, 2019 in honor of Captain Hyman’s ultimate sacrifice.

Hyman is survived by his niece Jan Hoppe of New Bern, NC, niece Peggy Mullins of Murfreesboro and nephew LaValle Sorrels of Bartlett.