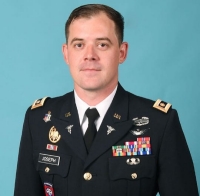 NASHVILLE – Tennessee Gov. Bill Lee and Tennessee Department of Veterans Services Commissioner Courtney Rogers recognize the service and sacrifice of U.S. Army Major Trevor Joseph of Collierville. Joseph was killed when his UH-60 Black Hawk helicopter crashed while attempting to recover a soldier on the Fort Polk training ranges on September 26. The aviation accident, which is still under investigation, injured three other soldiers. Joseph was the commander of the Charlie Company, 1st Battalion, 5th Aviation Regiment, known as “Cajun Dustoff,” at the time of the accident. He was 33-years-old.

“Trevor’s service embodies the Volunteer spirit and his leadership as the commander of the most active medical evacuation company in the U.S. Army is to be commended,” said Lee. “The State of Tennessee mourns the sudden loss of this dedicated soldier and extends our deepest condolences to Trevor’s wife, his family and his friends.”

Joseph commissioned in 2008 as a medical services officer and began his service as a pilot. He deployed twice to Afghanistan in 2010 and 2017. He was stationed in Fort Riley, Kansas; Fort Rucker, Alabama; and Fort Bragg, North Carolina.

“All Tennesseans are encouraged to respectfully pause to remember the legacy of service and sacrifice left behind by this exceptional officer,” said Rogers. “Major Joseph’s spouse, his family and his friends will remain in our thoughts and prayers during this difficult time.”

He is survived by his wife, Erin Joseph.

Family, friends and all who wish to pay their respects are invited to Harvest Church at 3645 Forest Hill Irene Road in Germantown from 11:00 a.m. to 4:00 p.m. (CDT) on Monday, October 7th. A memorial service will be held at 10:00 a.m. (CDT) at Harvest Church on Tuesday, October 8th. Interment at the West Tennessee State Veterans Cemetery at 4000 Forest Hill Irene Road will immediately follow the memorial service. The Joseph family will not be available for interviews.

The Tennessee Department of Veterans Services’ mission is to serve Veterans and their family members with dignity and compassion as an entrusted advocate.