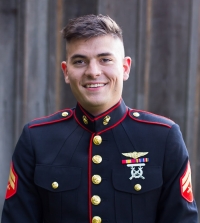 NASHVILLE – Tennessee Gov. Bill Haslam and Department of Veterans Services Commissioner Many-Bears Grinder recognize the service and sacrifice of U.S. Marine Corps Corporal William “Carter” Ross of Hendersonville.  Ross was declared deceased by the Marine Corps on December 11 after five days of search and rescue operations to find five Marines involved in an accident involving two aircraft.  The KC-130 Hercules was assigned to the Marine Aerial Refueler Transport Squadron 152, 1st Marine Aircraft Wing and the F/A-18 Hornet was assigned to Marine All-Weather Fighter Attack Squadron 242.    Ross was 21-years old at the time of the accident off the coast of Japan on December 6.  He was in the flight crew on the KC-130 at the time of the accident, which is currently under investigation.

”All Tennesseans should be proud of this decorated U.S. Marine who made the ultimate sacrifice to help keep all Americans safe,”” Haslam said.  “We extend our condolences and prayers to Carter’s parents, his younger sisters and his friends.”

Ross enlisted in the Marine Corps in 2016 and comes from a legacy of military service that dates back to World War I.  The Sumner County native worked in aircraft maintenance and refueling with the intention of becoming a crew master in the Marine Corps.  He attended Hendersonville High School and graduated from Aaron Academy in 2015.

“Although the life and service of Corporal Ross was cut short by this tragic accident, his legacy will live not only with his grieving family but as a driving force of our Volunteer spirit,” Grinder said.  “We join his family in mourning the loss of Carter and respectfully pause to recognize their sacrifice for our country.”

Ross is survived by his parents Todd and Michelle Ross as well as his sisters Katherine and Sarah.

The receiving of friends and family will be at Long Hollow Baptist Church 3031 Long Hollow Pike, Hendersonville, TN 37075 on Saturday, December 22 from 9:00 a.m. to 11:00 a.m. (CST) with the memorial service at the same location from 11:00 a.m. to noon.  The family will not be available for interviews.