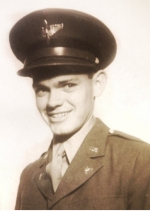 NASHVILLE – Tennessee Gov. Bill Haslam and Department of Veterans Services Commissioner Many-Bears Grinder recognize the service and sacrifice of U.S. Army Air Force Second Lieutenant Martin O’Callaghan, Jr. of Memphis, who was killed during a mission as a P-38 Lightning aircraft pilot in World War II in Maribor, Yugoslavia now known as Slovenia.  He was serving with the 96th Fighter Squadron, 82nd Fighter Group when his plane was struck by anti-aircraft fire which caused him to crash in occupied territory on February 15, 1945.  He was 22 years old.

A team from the American Graves Registration Office in Belgrade, Yugoslavia recovered the remains of an unidentified pilot from a village cemetery in July 1947 and reinterred them in the U.S. Military Cemetery at Belgrade only identified as Unknown X-36.  The remains were exhumed in an attempt to identify them in 1948, but results were inconclusive.  Therefore, Unknown X-36 was buried at Sicily-Rome American Cemetery in Italy.

“Marty was a Christian Brothers High School graduate, Memphis native and World War II hero,” Haslam said.  “As a courageous pilot he served his country and as a state we pause to welcome him home.”

“Claire Johnson waited her entire adult life to see her brother brought home,” Grinder said.  “Although she was alive to receive the news that Marty had been identified, she passed away just months before his final return to his final resting place.  We join the surviving family members for this welcome home that has been 73 years in the making.”

The Memorial Service will be held at the West Tennessee State Veterans Cemetery at 4000 Forest Hill/Irene Road in Memphis at 10:00 a.m. (CST) on Monday, November 5.

Haslam has declared a day of mourning from sunrise to sunset on Monday, November 5 in honor of O’Callaghan’s ultimate sacrifice.