If You Build It (Ducks) 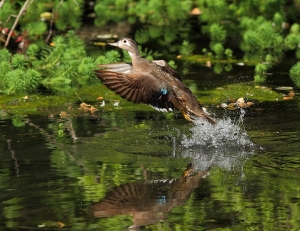 That's what The American Century Dictionary says about the word refuge. You remember dictionaries, right? No Google or search engine for this. No email cross-check. No social media. Just one simple word - refuge - that means so much to so many sportsmen across Tennessee.

And no one knows this word more than Tim White, migratory game bird program coordinator for the Tennessee Wildlife Resources Agency.

It's his job to know up close and personal the TWRA's waterfowl refuge system. He's all into circles on maps where waterfowl have taken refuge past, present and hopefully future. For this article we 're going to talk about places where waterfowl take refuge and where sportsmen - not just hunters, but also bird watchers and others – go to seek out the travels of the thousands of waterfowl which visit Tennessee (and, in particular West Tennessee) each year.

That’s especially true when it comes to banded mallard recoveries.

And that's good for the ducks, hunters and those who simply like to watch waterfowl.

White said the TWRA's mid­winter waterfowl counts have shown huge increases since the agency began its refuge system. He's got graphs and more graphs to show the change ih hunter harvest per day, per season and mid-winter counts.

What this all means, according to White, is that "we are now holding more waterfowl overall and they are better distributed, offering better hunting opportunities to more hunters."

Without the refuges, White said, "We would hold few ducks."

So, let's tum our attention to the TWRA's refuge expansion, which began in the mid-l 980s.

"Where once you had Reelfoot (Lake) and Tennessee National (Wildlife Refuge), we now have

refuges along the tributaries across the state and from Kentucky to Mississippi along the Mississippi River," said Jeff Warren, a 23-year TWRA veteran who works out of West Tennessee. "This system of refuges - both federal and state - has allowed migrating waterfowl to find safe havens all across Tennessee, providing migrating waterfowl the feeding and resting areas needed along their migration routes both south and the return migration to the breeding grounds."

“The areas (of West Tennessee) that once held huge numbers of ducks during the early part of the 20th century disappeared due to stream channelization, timber harvest practices, draining of wetlands and increased agricultural operations," Warren said. "In order to understand and appreciate where we are today with waterfowl management you need to understand where we came from and the huge obstacles that were overcome by the past waterfowl managers.”

One of West Tennessee's prime examples of how to get things right is White Lake Refuge.

Jason Maxedon is a Wildlife Manager 2 for the Lower Obion and Mississippi River units based out of Dyersburg. He over-sees White Lake Refuge, a 1, 194-acre refuge located in western Dyer County east of Tenn. 181 (the Great River Road), about two miles east of the Mississippi River bordered on the east side by the Running Reelfoot Bayou and the Obion River and I 0 miles north of Moss Island WMA and 18 miles south of Reelfoot Lake WMA.

In other words, it's smack dab in the middle of West Tennessee's prime waterfowl fly-way.

"This area because of its strategic location and historical past of holding waterfowl has been designated a waterfowl refuge," Maxedon said, noting that the designation and management are in keeping with the concept of providing intermittent small managed wetlands along historical migratory corridors for a diversity of migrating birds.

White Lake Refuge (731-285-6124) is an area that emphasizes integrated wetland management, which is at the heart of what the TWRA is successfully accomplishing in its effort to provide ample resting locations for migrating birds, whether its waterfowl, wading birds, shorebirds, reptiles and amphibians. The refuge was established to provide waterfowl and other migratory birds in the Mississippi Flyway with feeding and resting habitat as well as preserve existing bottomland hardwoods.

Most would say "mission accomplished."

White Lake Refuge resides within the major historic drainage from Reelfoot Lake to the Mississippi River. In the 1980s White Lake was cleared for agricultural use. Beginning in 1990, the TWRA began purchasing land to establish the refuge. A portion of the refuge was developed into water management units in 2006.

This is an on-going project with reforestation on 300 acres conducted in 1991, 1995, 2001 and 2004 using willow oak, water oak, cherry bark oak, nuttall oak, swamp chestnut oak and cypress. In 1992-93 the TWRA, in a joint effort with Memphis-based Ducks Unlimited and the North American Wetlands Conservation Act, constructed terraced levees, water control structures and a well on 615 acres to provide for waterfowl impoundments, moist-soil wetlands, emergent wetlands and flooding of agricultural crops.

In addition, the Obion River annually overflows its banks (usually in February, March and April), flooding the entire refuge in a drainage that has been the historic waterfowl flyway in spring and fall migrations. In addition, wading birds and shorebirds are attracted in significant numbers to the wetland habitat.

It's all part of why White Lake Refuge is the winter home of approximately 50,000 ducks and 3,000 geese. In some cold winters the refuge has been known to exceed a peak of I 00,000 ducks.

* During the spring and summer on the refuge, water is removed from the shallows of some impoundments to allow for the germination of natural wetland plants and the invertebrates attracted to these wetlands. After the plants have matured and produced an abundance of seeds, the impoundments are flooded. Waterfowl and other marsh birds feast upon these natural seed sources.

* Drawdowns in the moist soil areas also produce mudflats that nourish shorebirds during their spring and fall migrations.

White Lake's primary goal is to protect and enhance critical habitat for migratory waterfowl and shore birds. Located in the center of one of the busy Mississippi Flyway the refuge serves as an important resting and feeding area for migratory birds heading south. Upon entering the refuge there is a small parking lot on the right near the Great River Road. This parking lot is a trailhead for a 1/2 mile trail to a boardwalk through cypress bottoms and some mudflats, depending on water levels. Wildlife observation and photography are encouraged at the refuge.

Carl Wirwa, Wildlife Manager 2 based out of Region I, has been working on refuges in West Tennessee since 1993 and has witnessed first-hand the dispersion of waterfowl along the river corridors he believes is due to the agency's refuges.

"As evidence to the effectiveness of waterfowl refuges many hunters that have the resources have established mini-refuges within their clubs," Wirwa said. "These hunters have chiseled out a portion of their property and closed it to hunting. This appears to have made these clubs a little more successful."

The importance of the refuges goes beyond the obvious.

"We know that ducks are more likely to stay in the West Tennessee area if they have a place to rest and feed without disturbance but the long-term importance is that the birds that are not harvested by the end of the season will have the energy and fat reserves to molt and make the trip back to the wintering grounds and be ready to nest," Wirwa said. "That translates into more ducks the following year (weather permitting)."

More ducks translates into more hunting and/or viewing opportunities for all of us.

Larry Rea, who lives in Germantown, is a freelance writer and former outdoors editor of the Commercial Appeal in Memphis.