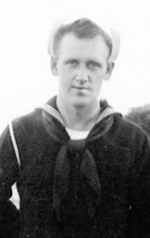 NASHVILLE – Tennessee Gov. Bill Haslam and Department of Veterans Services Commissioner Many-Bears Grinder recognize the service and sacrifice of U.S. Navy Seaman 2nd Class William Campbell of Elizabethton.  Campbell was serving on the USS Oklahoma at Ford Island, Pearl Harbor on December 7, 1941 when it was attacked by multiple torpedoes which caused the battleship to sink and resulted in the deaths of 429 crewmen to include Campbell.  He was 20 years old.

The remains of the crewmembers were recovered from the wreckage, buried in multiple cemeteries after attempts to identify remains, but ultimately only 35 men from the USS Oklahoma were identified.  The unidentified remains were buried in 46 plots at the National Memorial Cemetery of the Pacific (NMCP), knows as the Punchbowl, in Honolulu, to include Campbell.

On June, 2015, Defense POW/MIA Accounting Agency (DPAA) began exhuming remains from the Punchbowl for identification.  Campbell was identified on May 9, 2018, using DNA analysis and anthropological evidence.

“Although the attack on Pearl Harbor remains a painful wound for our country, William’s return to be laid to rest in the state he called home is a source of comfort,” Haslam said.  “We join the Campbell family in remembering this hero and we are grateful he will soon rest under a headstone that bears his name.”

“Welcome home, William,” Grinder said.  “It is bittersweet to think about the day our country, this state and the Campbell family lost so much, while also being grateful for the closure this identification and burial with honors will bring.”

Haslam has declared a day of mourning and ordered flags at half-staff from sunrise to sunset on Friday, October 12 in honor of Campbell’s ultimate sacrifice.

The Campbell family does not wish to be contacted by media or to release arrangements for Seaman 2nd Class Campbell.