Anytime a roadway crosses railroad tracks, there is a risk of a collision.  And in a collision with a train, you are 20 times more likely to be killed than if you were in a collision with another car.  The objective of TDOT’s Office of Rail Engineering is to improve safety and reduce crash risk at Tennessee’s public highway-railroad grade crossings.  “Grade” crossings refers to those crossings at which the highway and railroad are at the same level, as opposed to “grade separated” crossings in which there is a bridge to allow one to pass over the other.

The Office of Rail Engineering manages Tennessee’s Highway-Railroad Grade Crossing Program, commonly referred to as the Section 130 Program. Section 130 is a federal aid program authorized by United States Code Title 23, Section 130, and administered through the state by the Federal Highway Administration (FHWA).  Typically, Section 130 funds are used to install warning devices, such as train-activated flashing lights, automatic gates, and warning bells.  These funds may also be used to provide various other safety improvements at existing crossings and to assist in the closure of unneeded crossings. In accordance with USC 130(g), TDOT submits annual reports on the progress of the Highway-Railroad Grade Crossing Program. 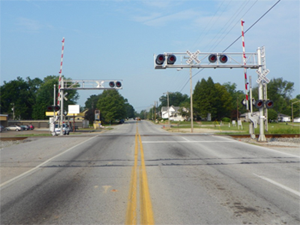 Tennessee typically receives about $5,000,000 in Section 130 funds annually.  Projects are provided a 90% federal cost share with a 10% match requirement. The typical cost of a Section 130 Program project to install flashing lights and gates on a two-lane road crossing is about $300,000, but can be considerably higher.  Priority for the available funds is given to crossings with the greatest likelihood of a collision occurring.  This is determined using an FHWA crash prediction model, which takes into consideration many factors. Major crash risk factors include:

For standards and procedures on construction of new crossings and conversion of private crossings to public crossings, see TDOT Rule1680-09-01.  Please contact the Office of Rail Engineering with any questions at TDOT.RailAdmin@tn.gov