The new troopers completed intense physical and classroom training which earned them their badges. The new graduates will continue their training with troopers classified as Field Training Officers, totaling more than 400 hours of hands-on experience in the field.

Governor Lee served as the keynote speaker during the graduation ceremony and welcomed the class. Commissioner Long swore in the new troopers as they delivered their oaths of office in the presence of Governor Bill Lee.

“You are going to accomplish great things as you leave here today,” said Governor Bill Lee. “You will make a difference and you will save lives during your career.”

“It’s was a great honor to join Governor Bill Lee as we graduated our new troopers,” said Commissioner Jeff Long. “They went through extensive training and preparation. They came here not knowing one another, but they leave here with a new extended family.”

“Throughout your career you will continue to be challenged,” said Colonel Matt Perry. “There are times that require us to change, adapt and grow. Maya Angelou said, “I can be changed by what happens to me, but I refuse to be reduced by it.” “Today I challenge you to rise up to the adversity you will face and never let it reduce you. “You do not serve yourself; you serve the citizens of the state of Tennessee and those that travel to and through our state,” said Colonel Matt Perry. “Governor Henry Horton said it best, you go not as Lords but as servants of the people.”

Bethel University presented a $5,000 scholarship to Trooper Melton Black. Trooper Black will serve at the Haywood County Scales in the Memphis District.

Trooper DeVonte Quinn of class 0120 and Trooper Thompson Stickler of class 1120 were named the top cadets for their respected class and presented with the Calvin Jenks Memorial Award for Excellence for their leadership, work ethic and academics. The award was named in honor of the late Trooper Calvin Jenks, who was killed in the line of duty in January 2007. 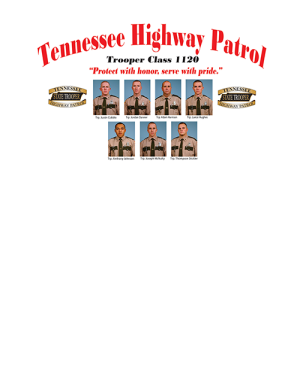