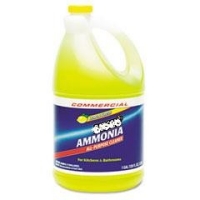 At room temperature, ammonia is a colorless gas with a very pungent odor. This odor is familiar to many people because ammonia is used commonly in cleaning products and smelling salts.

Ammonia gas can be dissolved in water. When this happens, it is called liquid ammonia or aqueous ammonia. People most often encounter ammonia as a liquid chemical in cleaning products. Once exposed to open air, liquid ammonia quickly turns back into a gas. Ammonia is also commonly used in fertilizers for farm crops, lawns and plants.

For industrial and agricultural purposes, ammonia is often shipped as a liquefied, compressed gas. This is commonly called anhydrous ammonia as it has no water.

Ammonia occurs naturally in the atmosphere.  Ammonia is formed in the body during the decomposition of organic materials. Bacteria found in the intestines can also produce ammonia.

Can ammonia be poisonous?

Ammonia has a very strong odor. If ammonia cannot be smelled, it is probably not enough to be harmful.  If you can smell ammonia, then health effects are possible with eye, nose or throat irritation being the most common effects. Leave an area that smells like ammonia for fresh air. Ventilate the area to clear the ammonia.

Where is ammonia in the environment?

For industrial and agricultural purposes, ammonia is often shipped as a liquefied, compressed gas. Ammonia is used in commercial refrigeration. Ammonia is applied directly into soil on farm fields.

Since ammonia occurs naturally in the environment, we are regularly exposed to low levels of it in the air, soil and water. Harmful exposures to ammonia could come from cleaning products or commercial applications.

People may be exposed to ammonia gas outdoors in the air from leaks and spills at production plants or storage facilities. It could leak from pipelines, tank trucks, railcars, ships and barges that transport ammonia. Higher levels of ammonia in the air may occur when fertilizer with ammonia compounds is applied to farm fields. Farmers, cattle ranchers and people who raise other types of livestock or poultry can be exposed to ammonia from decaying manure. Some manufacturing processes also use ammonia.

People may be exposed to ammonia indoors while using household products that contain ammonia such as cleaning solutions, window cleaners, floor waxes and smelling salts. Remember to ventilate rooms when you clean with ammonia and dilute it as recommended on the label. Never mix ammonia with bleach. Keep chemical cleaners out of reach of children to prevent exposure and poisoning.

Ammonia can also be released into the household air when pets urinate on rugs and when litter boxes are not changed often enough.

Some people could be exposed to ammonia at a job site. The Occupational Safety and Health Administration (OSHA) has a workplace standard for ammonia. If you might be exposed to lots of ammonia on the job, you may need special hazardous chemical training and personal protective equipment.

What are some cleaning alternatives to ammonia?

A chemical-free home is part of a healthy home. There are several alternative cleaning products that can be used in place of ammonia. Mixing natural products such as water with vinegar makes a good cleaner. Also, consider using baking soda. Other non-toxic cleaners, such as citrus-based cleaners, are widely available in retail stores.

How does ammonia enter and leave the body?

Ammonia can enter the body if you breathe ammonia gas or if you swallow water or food containing ammonium salts. Most of the ammonia that enters our body is from food or water that rapidly changes into other substances that will not harm us. You can breathe in ammonia when using cleaning products. Most ammonia that enters the body leaves in urine within a couple of days.

Larger amounts of ammonia may enter the body of people exposed from an ammonia spills or gas leak. There is no antidote for acute ammonia poisoning, but ammonia's effects can be treated. Persons who have experienced serious signs and symptoms may need to be hospitalized. Most people recover.

What are possible health effects of ammonia?

Ammonia is not hazardous to health at concentrations typically found in the environment. At higher concentrations ammonia can be harmful. The most common health effect is irritation to the eyes, nose or throat.

What should I do if I suspect an ammonia spill?

If you suspect an ammonia spill, call the Tennessee Department of Environment and Conservation’s environmental hotline number at 1-888-891-TDEC (8332).