Should a mercury-containing thermometer or light bulb break, do not reach for the vacuum cleaner to clean up the mercury.  Instead, open a window to ventilate the area.  Then read our fact sheet describing proper cleanup procedures for small mercury spills.

Old thermometers may contain mercury.  If broken open, the spilled liquid mercury can be messy.  A small mercury spill, such as a broken thermometer, is a nuisance but not an emergency.  The amount of mercury in a thermometer is so small that it is not believed to be a health hazard.  For small spills, do NOT use a vacuum cleaner.  You can push the beads of mercury together with an piece of cardstock.  Or use tape or an eye dropper to pick up the liquid mercury.  Always ventilate the area well for many hours to replace an mercury vapors with fresh air.  If a broken thermometer is cleaned up properly and promptly, your family will be safe.

Mercury was used for many years in thermometers designed for household use because no alternatives were available.  However, this is no longer the case.  In July 2001, the American Academy of Pediatrics issued a policy statement about the health effects of mercury.  They also urged doctors and parents to stop using mercury thermometers and to dispose of them properly.  Today, better alternatives such as digital or mercury-free thermometers are readily available.

Mercury thermometers, as well as other types of mercury-containing items such as old thermostats, barometers, meat thermometers, candy thermometers, manometers, blood pressure cuffs, and other household mercury waste or devices, can be brought to a Household Hazardous Waste Collection where they will be accepted for proper disposal.  Municipalities such as Davidson, Hamilton, Knox and Shelby counties have permanent sites.  Other counties may have special collection days.  For more information about how to properly dispose of household hazardous waste in Tennessee, please visit or call 615-532-9265.

Some people have asked, “How can compact fluorescent bulbs (CFLs) be more environmentally friendly if they contain mercury?”  The answer is that CFLs are highly energy efficient.  A typical incandescent light bulb burns hot.  Most of the energy used by the light bulb is released as heat.  Only about a small amount of the energy used is released as light.  CFLs are the opposite, producing lots of light and only a little heat.  CFLs use 50-80% less energy than old fashioned light bulbs.  To make electricity, fossil fuels such as coal are often burned.  When the electricity is generated, mercury is a by-product.  Less energy to power CFLs mean less mercury by-product.  Over the lifetime of an energy-efficient CFL, there is less mercury created as a by-product of the electricity generated than the tiny amount of mercury present inside the CFL. 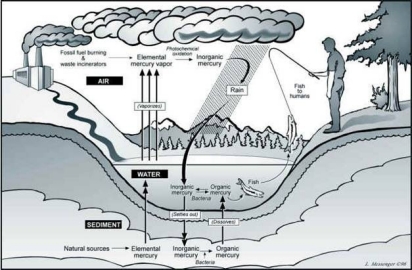 The second graphic shows how organic mercury can build up in living organisms. The graphic shows how methylmercury in lake sediments can get into fish. As the fish are eaten by larger animals, including humans, the methylmercury is passed along. Over time, this methylmercury can bioaccumulate in these larger animals. Eating large amounts of contaminated fish or wildlife can be a health hazard to people. In general, the larger predatory fish bioaccumulate more methylmercury than smaller pan fish. In small amounts, the health benefit of eating a balanced diet that includes fish is believed to be beneficial even though a small amount of methylmercury maybe ingested. 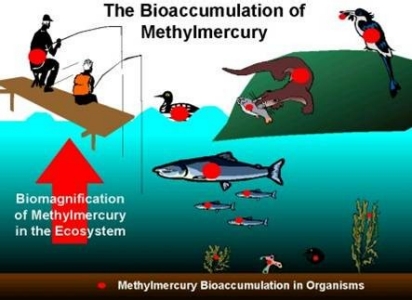 For a large mercury spill, your area’s Hazardous Materials (HazMat) unit, often located in the Fire Department, may be able to assist.

Health Canada
It's Your Health
http://www.hc-sc.gc.ca/hl-vs/iyh-vsv/environ/merc-eng.php