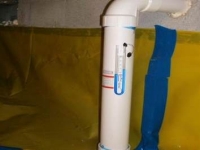 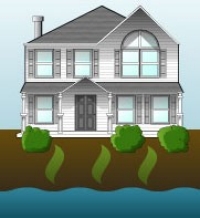 What is vapor intrusion?

How do chemical vapors move into a building?

Vapors come off chemicals in underlying soil or groundwater. These chemical vapors can move in the ground, in groundwater or into buildings because they move from areas with higher amounts to areas with lower amounts. This process is called diffusion. Vapors can also move into a building due to barometric pressure changes, wind, temperature currents or use of building exhaust fans. The rate of movement of chemical vapors into a building depends on many factors such as the type of soil, the properties of the chemicals, the design and condition of the building, and the difference in pressure between the indoor air and outdoor air.

What are some common chemicals at vapor intrusion sites?

Who is at risk from vapor intrusion?

All people who live, work, attend school, attend daycare or play indoors over polluted soil or groundwater are at risk from vapor intrusion. Unborn babies, infants, the elderly and people with chronic heart disease or respiratory problems are at greater risk.

How are people exposed to chemicals at vapor intrusion sites?

Chemicals in the underlying soil or groundwater can migrate into the indoor air of a building through cracks in the floor, utility penetrations in a basement or from unlined crawl spaces. Building roofs trap chemical vapors that have migrated into the indoor air. These vapors increase in concentration as they accumulate in the indoor air over time.

Can vapor intrusion be harmful?

Yes. Measurements at many sites such as homes, businesses and daycares show vapor intrusion is a concern.

In the majority of settings, however, it is not clear that vapor levels present more than a theoretical risk. This theoretic risk is based on longer time exposures than most people would experience, such as being exposed 24 hours each day, over the entire year, for a 70-year lifetime. Remediation requirements in some states are based on indoor air contaminant levels that are far less than those considered harmful for eight-hour workplace exposures under Occupational Safety and Health Administration (OSHA) regulations.

How do I know if vapor intrusion is happening at my home, workplace, daycare or school?

If your home, workplace, daycare or school is built near a site that had a release of chemicals, there may be the potential for vapor intrusion in the building. The only way to know if vapor intrusion is occurring inside a building is to test the indoor air. Other soil vapor or soil-gas tests can be done outside or beneath the building.

What should be done if you suspect vapor intrusion is occurring where you live, work or play?

Research whether there was the potential for chemicals to have moved beneath your home, school, work place or daycare. If there are no industries that now or in the past handled chemicals nearby there is less of a chance of any chemical movement in the soil or groundwater. There are no monitors or detectors similar to smoke alarms that can warn you when chemicals are in the indoor air.