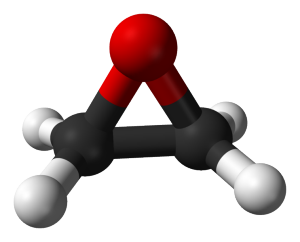 What is ethylene oxide?
How is EtO regulated?
How might I be exposed to EtO?
What are possible health effects of EtO?
Is there a test to check if I've been exposed to EtO?
Government partners
Additional resources
Helpful documents

What is ethylene oxide?

EtO is most often used in two ways:
1) to make other chemicals needed for many everyday products like fabrics, plastics, antifreeze, detergents, glues, and make-up, and
2) to disinfect equipment that cannot be cleaned by steam, mostly for the medical industry.

EtO is also used to sterilize some food products, such as spices, dried herbs and vegetables, sesame seeds, and walnuts.

How is EtO regulated?

EtO emissions are controlled by the U.S. Environmental Protection Agency (EPA) under the Clean Air Act.

Due to new studies on health effects, EPA plans to strengthen limits on releases from commercial sterilizers using EtO.

Workers may be exposed to EtO if they work in places where EtO is produced or used, such as chemical plants and commercial and hospital sterilizers. These workers may have higher-than-average exposure.

What are possible health effects of EtO?

EPA does not expect EtO levels in the outdoor air around facilities to be high enough to cause instant, or “acute,” effects.

Short-term inhalation exposure to high amounts of EtO can cause dizziness, nausea, headaches, tiredness, respiratory irritation, and in some cases vomiting and other types of stomach distress.

EtO can cause cancer. Studies of workers exposed to high levels of EtO over an average of 10 years or longer had higher risks of certain types of cancer, such as some blood cancers and breast cancer. Similar cancers were also found in animal studies.

For non-occupational settings, the greatest cancer risk is for people who have lived near an EtO-releasing facility for their entire lifetime.

Is there a test to check if I've been exposed to EtO?

According to the Agency for Toxic Substances and Disease Registry (ATSDR) two kinds of tests can show if you have been recently exposed to EtO. One test measures EtO in blood and the other measures it in breath.  However, these tests are not meant for individuals exposed at low levels of EtO. Additionally, once exposure stops, EtO leaves the body within hours or days, so a medical test may not show if you have been exposed in the past. These tests cannot be used to predict how EtO will affect a person’s health and are not usually available in a doctor’s office.