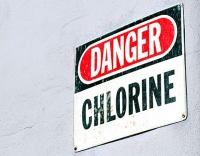 Chlorine is a greenish-yellow, poisonous gas. It has a pungent, irritating odor. It is a very corrosive, hazardous chemical. Chlorine is not flammable, but may react explosively or form explosive compounds with many common household products like vinegar or ammonia.

What are some uses of chlorine?

Chlorine is one of the most commonly manufactured chemicals in the United States. Chlorine is commonly mixed to make products like household bleach or swimming pool shock. It is used to kill harmful bacteria in drinking water. It is used as part of the sanitation process for industrial wastewater and sewage. Chlorine is also used to make pesticides, synthetic rubbers, refrigerants, paper and cloth.

What are the health effects of chlorine?

Chlorine is a safe and effective disinfectant when appropriately used. Symptoms of chlorine poisoning vary depending on the amount of chlorine to which a person is exposed, how a person is exposed, the length of the exposure and whether the chemical is inhaled, touched or eaten. People’s bodies respond differently to chlorine exposure. People with preexisting lung or heart disease may be particularly sensitive to chlorine.

Children may receive a larger dose than adults exposed to environments with the same levels of chlorine gas because they have greater lung surface area-to-body weight ratios and increased minute volumes-to-weight ratios. Children may be more vulnerable to corrosive chemicals like chlorine than adults because of the smaller diameter of their airways and also failure to evacuate an area promptly when exposed. In addition, they may be exposed to higher levels than adults in the same location due to their shorter height, as higher levels of chlorine gas may be found closer to the ground.

The following signs and symptoms may develop during or immediately after exposure to chlorine:

Chronic exposure to chlorine may cause corrosion of the teeth. Long-term exposure to low levels of chlorine gas is potentially related to lung diseases such as bronchitis or shortness of breath. Multiple exposures to chlorine have produced flu-like symptoms and a high risk of developing reactive airways dysfunction syndrome.

What to do if you are exposed to chlorine?

How to reduce the risk of chlorine exposure?