Tennessee and the Volkswagen Diesel Settlement 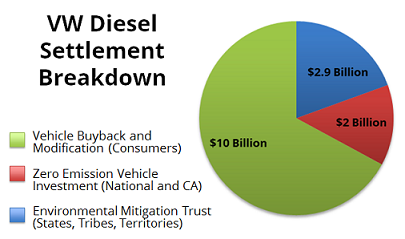 In 2015, Volkswagen (VW) publicly admitted that it had secretly and deliberately installed a defeat device—software designed to cheat emissions tests and deceive federal and state regulators—in approximately 590,000 model year 2009 to 2016 motor vehicles containing 2.0 and 3.0 liter diesel engines. The United States Department of Justice (DOJ) filed a complaint against VW, alleging that the company had violated the Clean Air Act. In October 2016 and May 2017, the U.S. District Court, Northern District of California (“Court”), approved two partial settlements related to the affected 2.0 and 3.0 liter vehicles, respectively, totaling $14.9 Billion (“the VW Settlement”).

Information on these three components of the VW Settlement is available below.

How are we doing? Please provide any feedback related to TDEC's VW Settlement webpage to OEP Senior Program Manager Alexa Voytek at Alexa.Voytek@tn.gov or 615-613-1096.

If it is hard for you to read, speak, or understand English, please see our Language Assistance webpage for more information about our free language assistance services.

Under Appendix C to the Volkswagen Diesel Settlement’s First Partial Consent Decree, VW must invest $2 Billion over 10 years in projects that support the increased use of ZEVs, which are defined as battery electric vehicles (BEVs), plug-in hybrid vehicles (PHEVs), and fuel cell electric vehicles (FCEVs). This will be a VW-administered program. VW has created a separate entity within VW Group of America, known as Electrify America, LLC, to oversee the ZEV investment. The funding will be distributed over four, 30 month cycles:  $300 Million per cycle in the National ZEV Investment Plan with EPA oversight (totaling $1.2 Billion) and $200 Million per cycle in the California ZEV Investment Plan with California Air Resources Board (CARB) oversight (totaling $800 Million).

On December 9, 2016, VW launched www.electrifyamerica.com, which provides information on VW's Zero Emission Vehicle infrastructure and awareness campaign, as well as details on how states, municipalities, and others can submit proposals to help inform VW's ZEV Investment Plans over the next 10 years.

In June 2021, Electrify America released its Cycle 3 National ZEV Investment Plan (covering the third of the four cycles, which will run from January 2022 to July 2024). The Plan details how Electrify America will invest $300 Million in Cycle 3 funds into charging infrastructure and consumer education—including in areas not previously addressed in Cycles 1 and 2, such as access to EV charging for residents of multi-unit dwellings and infrastructure for taxi and transportation network company vehicles. Specifically, this plan outlines community charging infrastructure investments in 25 metropolitan areas, including the Nashville-Davidson County, Murfreesboro, and Franklin metropolitan area, and expands upon Cycle 1 and 2 investments in EV corridor charging along major highways. Several of these corridors run through Tennessee, including I-40, I-24, I-65, and I-75. The Plan anticipates 1-3 new stations to be added to the Nashville area and identifies the I-24 corridor between Manchester, TN and Atlanta as a regional route to be prioritized for new stations, upgrades and enhancements, and ongoing operations. As of now, there are ten Electrify America stations that are online and operational in Tennessee (in Memphis, Jackson, Clarksville, Nashville, Manchester, Cookeville, Ooltewah, Knoxville, and Kodak).

TDEC has submitted feedback to Electrify America for the Cycle 1, Cycle 2, and Cycle 3 solicitations for public comment, proposals, and recommendations. The State will continue to coordinate and engage with the company in an effort to spur investment by Electrify America in Tennessee.

More information regarding the VW Settlement ZEV Investment can be found in Appendix C to the First Partial Consent Decree.

More information regarding the VW Settlement Vehicle Buyback and Emissions Modification Program can be found in Appendices A and B to the First and Second Partial Consent Decrees.