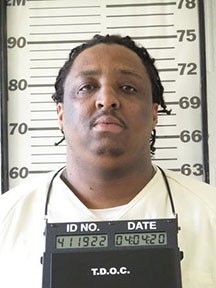 HENNING – The Tennessee Department of Correction’s Office of Investigations and Conduct (OIC) has helped to secure the federal indictment of a notorious gang leader.  Inmate Terry “Cockeye” Smith has been charged as part of a multi-state drug trafficking investigation involving federal, state and local law enforcement agencies.  Commissioner Tony Parker said the charges against Smith will go a long way in helping to ensure safe and secure prisons in Tennessee.  “This indictment is a huge step toward keeping drugs and other contraband out of our facilities,” Parker said.  “TDOC is relentless in the fight to prevent illegal drug activity inside state prisons and working with our law enforcement partners to ensure those who participate in illegal activity are held accountable.”

Smith is a high-ranking member of the Vice Lords criminal street gang.  He has been serving a 14-year sentence out of Shelby County at the West Tennessee State Penitentiary for facilitation of attempted second-degree murder and aggravated assault.  He has been transferred from TDOC custody to federal custody.

Thanks to the dedicated work of TDOC special agents and intelligence analysts, Smith is now facing federal charges of arranging the sale of large quantities of illegal drugs.  “The work of these TDOC professionals will significantly interrupt the illegal distribution of contraband inside Tennessee prisons,” Commissioner Parker said.