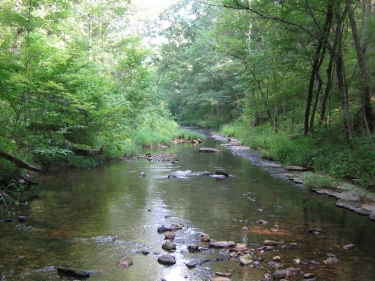 Auntney Hollow is a 26-acre natural area in Lewis County. It is significant because it supports a rare Tennessee yellow-eyed grass (Xyris tennesseensis) seep community. This small seep is less than one tenth of acre and is located at the base of a west-facing slope near a tributary of Little Swan Creek. The size and shape of the natural area was established to protect the watershed immediately surrounding the seep. The State was able to protect this natural area by receiving a donated conservation easement from the former property owner, Weyerhaeuser, Inc. in 2002.

The natural area supports one of only seven populations of the federally and state-endangered Tennessee yellow-eyed grass found in Tennessee. All seven populations are found in Lewis County. Tennessee yellow-eyed grass is considered one of Tennessee's rarest plant species. There are only fourteen populations known to occur in the world. Auntney Hollow is one of the largest populations known with dozens of clumps of varying size and age classes. The state-listed Grass of Parnassas (Parnassia grandiflora) is a co-dominant species in this seep and is a prominent plant that is easy to identify because of its large round conspicuous leaves.

The xyris community seep is susceptible to illegal off-road vehicle (ORV) damage. The seep requires occasional thinning to manage woody growth encroachment. If not managed, xyris and other herbaceous plants in this seep community could become displaced by alder and willow.

Closed to the Public

The property is privately owned and not open to the public. Visitation is permitted by request only.