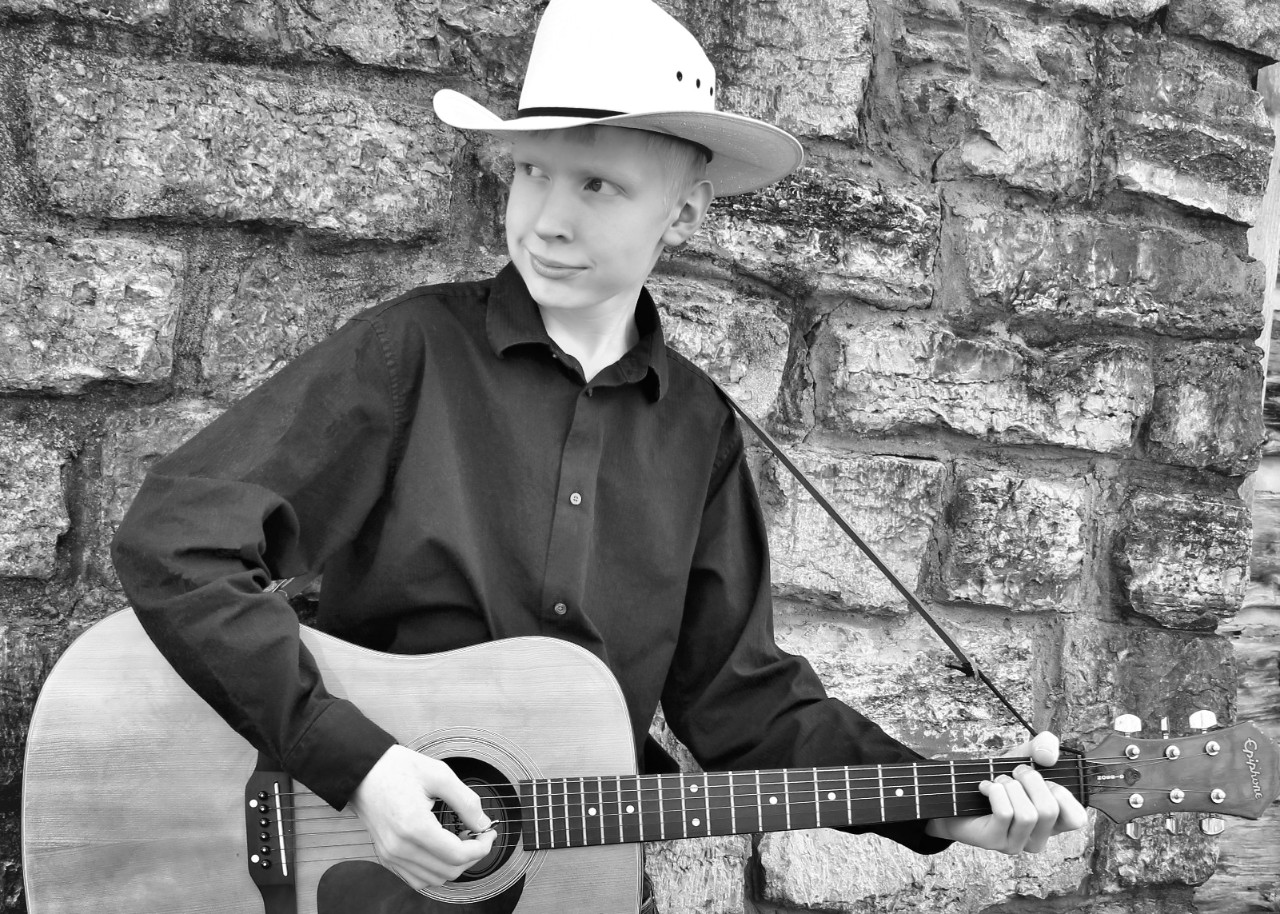 Listening to Andrew Braach sing live, or on his first CD, Talkin’ to Ghosts, Volume 1, is like being transported back to another time. It’s a time when seminal country artists like Hank Williams, Sr., Merle Haggard, and Johnny Cash – three of Andrew’s all-time favorites – could slay you with just an acoustic guitar and some raw, poignant lyrics.

Whatever it is that drew Braach to traditional country music, it’s working for him. In a relatively short time, Andrew has been able to perform on numerous occasions, at various venues, sometimes even sharing the bill with more established artists. That takes a lot of self-confidence, which wasn’t always there.

“The first time I ever performed I couldn’t even look at the audience,” Andrew recalled. “I had to go somewhere they couldn’t see me. I sang from a side room. Now it’s fun to get on stage and sing. When I first get up there I’m super nervous, but once I start performing the nervousness falls away.”

Andrew has overcome other personal obstacles, which might have kept another, less determined individual from pursuing a career in the limelight. “When I use music, I need it in large print so I can see, which is due to [my] ocular cutaneous albinism,” Andrew explained. “Also, when I perform outside I need to be in the shade or [use] lots of sunscreen and a hat. Socializing with fans is hard, since I have autism. It’s not that I don’t want to talk to them, but I can’t find the words to speak.

“I have a Golden Doodle who is being trained to be my service dog,” continued Andrew. “He’ll be trained to go with me to some of my venues when I sing. Maybe he will even howl along to the songs!”

In other ways, Andrew’s disabilities have been a plus. “I’m very focused, which helps me practice until a song is performance-worthy,” he said. “And when I’m writing a song, if I can’t think of a lyric, I just keeping thinking until I come up with something. My memory is really good, which helps me remember song lyrics. Since I overcame speech problems because I didn’t talk for a long time, it’s made me feel like I can accomplish more.”

Andrew is 17 now, and has been playing the guitar since he was 10. That’s when he started taking lessons and got his first guitar. “I wanted one after my older brother started taking guitar lessons and asked for one,” said Andrew. “We bought it at Toys “R” Us.”

He’s also been taking singing lessons from Vera Warrick for the last two years, because Andrew has big, professional aspirations.

“One of my recent goals is to get on The Voice,” he said. “I’d also love to play on The Grand Ole Opry. I also want to gain more experience playing in front of crowds. I’m hoping to make a living from doing it. One of my biggest goals is to help people realize what country music really is, like reviving the old country music. I’ve also written some of my own songs and hope to write more in the near future.”

Andrew benefits from family and friends who are 100 percent supportive of his dreams. His mother, Angela Braach (a graduate of the Council’s Partners in Policymaking® Leadership Institute), and his dad, Chris Braach, keep Andrew’s career news up-to-date through social media. His friend Dalton Barrett, a producer at WGNS Radio, helped Andrew make his CD. Another friend, Amanda Johnson of Creative Photography, takes stunning pictures of Andrew for his CD covers and flyers. Country artists Brian Warren and Brenda Lynn Allen invited Andrew to sing with them at Duck River Country Store, and he’s opened up for The Cooter River Band and Daniel Rothwell and the Overall Creek Band.

“All of my family and friends that live in Montana have been supportive as well,” said Andrew. “This past summer, they invited me to sing at church, around campfires, and [for] my grandparents’ anniversary and birthday party.”

If you’re interested in listening to Andrew’s music, he’s in the process of setting up a YouTube channel for his music. Currently, Andrew has videos posted and CDs for purchase on his Facebook page: https://www.facebook.com/andrewmarkbraach/.

“I like that people are inspired by my music,” said Andrew. “That’s a good feeling.”