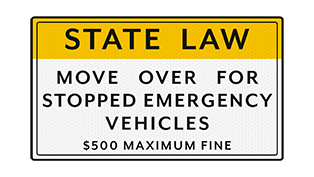 Tennessee Code Annotated 55-8-132 is commonly referred to as the Move Over Law.

The law requires motorists to move over into an adjacent lane of traffic, when safe to do so, or alternatively to slow down when approaching emergency vehicles, including recovery vehicles (tow trucks), highway maintenance vehicles, solid waste vehicles, or utility service vehicles. Essentially, the law applies to any responder vehicle with audible (sirens) or visual (flashing lights) signals drivers may see on Tennessee roadways.

When the law passed in 2006 as part of the Failure to Yield to Emergency Vehicles Law, Tennessee was the 30th state to enact such a law, which creates a safety zone to protect police, firefighters, other emergency, highway, and utility workers.

The penalty for violating the Move Over Law in Tennessee is a maximum fine of up to $500 and possibly up to 30 days in jail.

A "Move Over" campaign (separate from the Work with Us campaign) was created to raise awareness of the Move Over Law and to protect state troopers and others whose workplace is often the side of a busy highway.

Following the death of three TDOT workers, who were struck and killed by passing motorists in 2016, the Tennessee Highway Patrol partnered with TDOT HELP Operators for Operation SOS - Safety on the Smartway. During the operation, troopers patrolled all interstates coming into Nashville, Davidson County, and issued 41 Move Over citations, one Texting and Driving Citation, and arrested one person for D.U.I.  According to the THP, "This operation was a success, and it shows the dangers all emergency and service personnel face as they work on the side of the roadway." Watch the video below to see the operation in action.

For more information on the Move Over Law (T.C.A. 55-8-132), including statistics and personal stories, visit the Tennessee Department of Safety & Homeland Security.