Aviation is moving Tennessee forward. You may not fly all the time but aviation activities impact us every day. The list of aviation services and jobs goes on and on – airline agents, pilots, airport managers, firefighting, etc. It all starts and ends at an airport, from one of the busiest air cargo airports, Memphis International, to one of our 70 plus general aviation airports. Aviation is moving Tennessee forward.

Aviation technology really took off after WWI. Airfields were being built to service an increasing number of aircrafts while out of work pilots traveled from town to town selling joyrides to Tennessee’s rural population. More people were being exposed to it and taking part in it.

In 1929, the state legislature  created the Division of Aeronautics which included an eight-member Advisory Board. Under the Department of Highways and Public Works, it was tasked with procuring and developing landing fields and airports to promote the growth of aviation in the state. That same year Interstate Airlines, Inc. bought 182 acres of land seven miles north of Murfreesboro on the Dixie Highway. Sky Harbor Airport opened in October of 1929 and was middle Tennessee’s principal commercial airfield for nearly a decade. 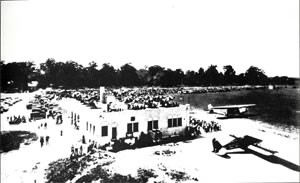 The ten years leading up to WWII, 1929 to 1939, was known as the “golden years” of civil aviation. Airlines were engaged in fierce competition for passenger service. Tennessee’s more populated areas fully realized the need to prepare for air transportation and began building municipal airports for that purpose.

The United States needed to begin a major aviation training program for World War I. The U.S. Army announced it wanted bases in locations with ten or more months of favorable flying weather each year. The Memphis Chamber of Commerce pointed to a 907-acre site in the farming community of Millington with flat terrain and a major highway and railroad nearby. They called it Park Field. At its peak, Park Field was the most active pilot training school in America. 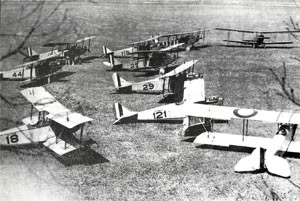 In 1935 Nashville needed a bigger airport to service larger planes. A 15-member citizens’ committee was appointed by the mayor to select a new airport site. They found 337 acres, comprised of four farms, six miles southeast of Nashville along Murfreesboro Road. It took two years to build the airport opening in June 1937. Forty thousand people showed up for its dedication. The leading Army Air Service ace of WWI, Captain Eddie Rickenbaker, called it “one of the five best airports in the world." 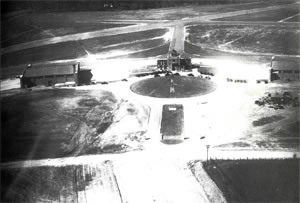 A 1936 Tennessee Aeronautics Commission report stated: “Traveling cross country you will stand a better chance of arriving at your destination safely by going on the airlines, than by traveling on the highways.”

By 1940, 30 airliners operated from Memphis each day. Its three runways pointed to viable air routes in every direction: New York through Memphis to Dallas and Los Angeles, from New Orleans through Memphis and then north, from Tampa Florida through Alabama and on to Memphis. During the 1970’s, terminal capacity was doubled, another new runway was constructed. A new company, Federal Express Corporation started making Memphis one of the busiest cargo airports in the world. 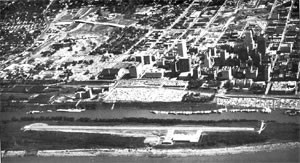 Charles Lindbergh visited Memphis in 1927 and had the unique idea of creating a runway across the river. The Memphis Downtown Airport on Mud Island became reality in 1959. The 3,100 foot paved runway ran parallel to the Mississippi River bank a few hundred feet west of downtown Memphis. Passengers rode a ferry across the river to Front Street. It was the country’s first airport built in such close proximity to a city. It closed when a bridge was built over the north end of the runway. It’s now a park.

In the years that followed after WWII Tennessee saw the construction of more than 130 airports, airfields and sky parks. Today the Aeronautics Division has the responsibility of licensing 142 heliports and 74 public/general aviation airports. It also oversees grants to improve and rehabilitate these facilities. In addition to maintaining one of the nation's best aviation systems, it also provides aircraft and related services for state government executives, staffing for the Tennessee Aeronautics Commission, and numerous educational support programs. 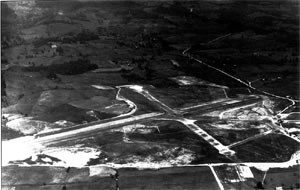 Industrial development in the region led to the opening of the Tri-City Airport in 1937. It was named after U.S. Senator Kenneth D. McKellar, an advocate for air transportation whose influence in Washington helped secure funds for many airport projects in Tennessee. The State Highway Department improved access to the airport with the construction of Interstate 75.

Lovell Field opened in Chattanooga in 1930. Harry Porter performed air shows every Sunday and gave plane rides. Soon people began asking for flying lessons. That turned into Porter Flight Service. In 1938 the State Bureau of Aeronautics started a free flight instruction program with Porter as its pilot. The program was a boost to general aviation in every major Tennessee city. That same year the Chattanooga Flyers Club was started and became responsible for creating several flying schools.

In the 1950s and 1960s, Tennessee saw the construction of more than 130 airports, airfields and sky parks. Today the Aeronautics Division has the responsibility of licensing 142 heliports and 74 public/general aviation airports. It also oversees grants to improve and rehabilitate these facilities. In addition to maintaining one of the nation's best aviation systems, it also provides aircraft and related services for state government executives, staffing for the Tennessee Aeronautics Commission, and numerous educational support programs.