100 Years of Driving to be the Best

The Tennessee legislature authorized raising funds for cutting and clearing a wagon road from Southwest Point, a federal frontier outpost at what is now Kingston, Tennessee to the “settlements on the Cumberland River” or Nashville in 1794. 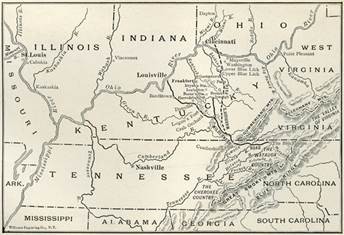 Walton Road running through Roane, Cumberland, Putnam and Smith Counties was named after the man who could be called the first road commissioner before there was a department. William Walton, who founded Carthage, was appointed along with William Martin and Robert Koyle as commissioners by the legislature in 1799 to relocate and clear a road at the state expense of $1,000. Leading this effort was Walton. His family opened inns for travelers and operated ferries across the Cumberland River at Carthage. In many areas Walton Road’s location served as a foundation for the Tennessee Central Railroad on U.S. 70. One of the first to use this road was Andrew Jackson who made 22 trips from Jonesborough to Nashville by 1802.

William Walton and his wife are buried in Carthage near the banks of the Cumberland River.

Long before the invention of the automobile in 1804, Gov. John Sevier opened sealed bids to award the first road building contract to Adam Peck at the state capitol in Knoxville. It was to be at least a road 127 miles long from Kingston to the Georgia line and at 15 feet wide. It took a year longer than the expected four months to complete and with a required surety bond and extra pay for workers, Peck likely took a significant loss on the project.

In 1915 when the highway department was created, a six-member commission was established under law. Because of the close relationship between highways and engineers, Charles Edward Ferris who was the first dean of UT Engineering Department, was appointed as one of the three ex-officio members of the Highway Commission. He went on to gain prominence at UT by founding the country’s first cooperative engineering programs.  Ferris Hall on the UT campus is named for him.

Turnpike: more than a road

The idea arrived with early settlers from England. Toll gates were constructed with long pikes directed toward vehicles. A long timber or “pike” stopped traffic for the toll collection. Once the toll was paid, the pikes were then “turned” out of the way for traffic or animals to pass, hence, the term turnpike. The first high quality roads in Tennessee were built by private companies or individuals which recovered their costs through toll collections from traffic.

Where should the road be?

To help connect Memphis with the rest of the state in 1912, the first survey and planning service by the federal government furnished to any state set up shop in Nashville. Called the Office of Road Inquiry, the intent was to devise uniform plans for the road.

It started out as a manufacturer of gas engines and boilers for industrial use in Jackson, Tennessee and by 1904 was the largest plant of its kind in the U.S. The company was moved to Nashville when it became one of the few car companies to manufacturer vehicles from design to final product.  It went out of business in 1914 but the building remains a business center called Marathon Village. 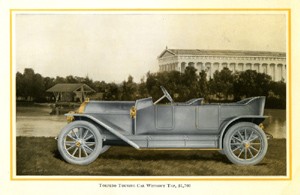 The national movement for better roads was led by the League of American Wheelmen, a national organization of bicyclists supporting the escalating use of bicycles. Also as an outgrowth of the “Country Life Movement” to improve rural life and reverse the exodus of young people to cities in Tennessee, the Good Roads Movement was organized early in the first part of the century to improve Tennessee's economic prospects by upgrading and expanding its roads.  This led to an improvement of Tennessee’s inadequate highway system to over 4,000 miles of roads by the late 1920s.  (more) 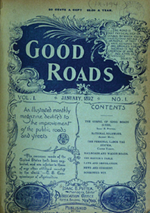 Near Impeachment Over Highways

When Gov. Austin Peay died in office in 1927, the speaker of the senate, Henry Horton assumed the governor’s chair. He was politically aligned with Luke Lea, the publisher of the Nashville Tennessean and Rogers Caldwell, an investment banker.  Before his death Peay had fought the patronage system, but while in ill health, highway commissioner C. Neil Bass was approached by Lea to buy, without competitive bidding, Kyrock, a Kentucky road building material used by a company owned by Caldwell and Lea, but Bass refused. When Gov. Peay died, Lea became one of Gov. Horton’s advisors and soon Commissioner Bass was fired and Caldwell began receiving many state contracts. The relationship went so deep in state government that the Caldwell banking empire sold and received commissions on state bonds totaling $45 million. This relationship became a campaign issue in 1928, but Horton won election by 5,000 votes. Only three days after the election, Caldwell and Company collapsed and with it the state of Tennessee lost an estimated $7 million deposited in Caldwell banks. E.B. Stahlman, publisher of the Nashville Banner, set out to have Horton impeached calling Caldwell “Kid Kyrock” and referencing Lea as "Musso-LEA-ni" in his newspaper editorials and cartoons. The General Assembly investigated these activities and recommended impeachment. The issue eventually faded without impeachment, but Horton did not seek reelection in 1932.

For more on Caldwell:  http://tennesseeencyclopedia.net/entry.php?rec=172

The result of the nasty Horton impeachment squabble resulted in the public’s lack of faith in the road building program.  With a proposal from Horton to issue $20 million in bonds for highway work, the Tennessee General Assembly balked and adjourned without approving any new highway construction. With no funding, Highway Commissioner Bob Baker announced on July 6 that he was discharging all highway construction workers totaling about 4,000 men. An influential engineering journal, Engineering News-Record, reached this conclusion: “By a puerile move of partisan politics a program of needed state road improvement is disrupted. Tennessee cuts off its nose to spite its face.”

In 1915 people located in rural Tennessee and across America could not receive free mail service. The Post Office Department would not provide free delivery to rural areas without adequate roads.  To help the cause of farmers the Department of Agriculture and the Post Office became a partner in the Good Roads Movement. The “Get the Farmers out of the Mud” movement in 1916 culminated in the enactment of the first Federal Aid Highway Act.

In highway contracting, bid rigging is conspiring before a highway bid letting to promise the contract to one party even though for the sake of appearance several parties also present a bid. In 1979, the U.S. Department of Justice investigated highway bid-rigging practices in Tennessee. It resulted in criminal antitrust charges under the Sherman Act prohibiting conspiracies in restraint of trade and commerce. Between 1979 and 1983 there were 215 indictments handed down in 20 states. Tennessee had the most indictments of companies and individuals at 47. There were $44 million in fines imposed and a total of 44 years in prison levied. The DOJ document stated that highway bid rigging” challenges the integrity of the bidding process.” The DOT determined bid rigging began with paving contractors who would meet before the state bid letting and determine what the low bid would be.  All others would bid higher, thus allowing the predetermined low bidder to get the bid. Having the low bid was shared among the companies so all received state contracts at some point.

Because of Muscle Shoals and other obstructions in the Tennessee River, East Tennessee lacked an outlet to western waters. East Tennessee saw their future in rail to connect them to the eastern seaboard. In the 1830s East Tennessee businesses began pushing for railroads, but with Nashville’s waterways, the state had no railroad mileage until 1860 when over 1,200 miles had been laid mostly in East Tennessee with no line connecting Knoxville to Nashville.

Tennessee U.S. Senator Albert Gore, Sr. and Congressman George Fallon of Maryland introduced bills in Congress for the construction of the interstate system which was enacted in 1956 as the “National System of Interstate and Defense Highways” often called the Fallon-Gore Act. In honor of the late U.S. Senator from Tennessee, all interstates leading into Tennessee are marked the "Albert Gore, Sr. Memorial Highway." The official ceremony opening the first section of interstate on I-65 in Ardmore, Tennessee was conducted on Saturday, November 15, 1958, at 10:30 a.m. State Highway Commissioner W.M. Leech presided over the ribbon cutting. Construction began in May, 1957 for the “Figure 8” interchange. 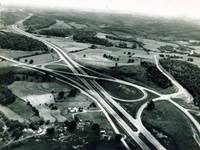 The Mystery of the Zero Milestone

To this day, it is a mystery as to what happened to the Tennessee Zero Milestone erected May 12, 1924.  Six months after a Zero Milestone marker was placed in Washington in October, 1923, Tennessee placed one in the southeast corner of Memorial Park at Union Street and Sixth Avenue in Nashville. Like the nation’s marker, Tennessee’s monument was a large stone Roman symbol measuring and marking roads emanating from the capitol city. As state government progressed in Tennessee and new buildings were built, the large stone was moved to the Highway Department’s Nashville region location on Charlotte Avenue. Eventually a new region facility was built and the stone was lost even though it weighed several tons. In the early 1990s after an exhaustive search for the stone, TDOT erected a Zero Milestone in the Bicentennial Mall in Nashville as a modern representation of the 1924 memorial. 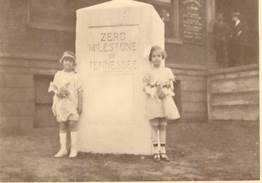 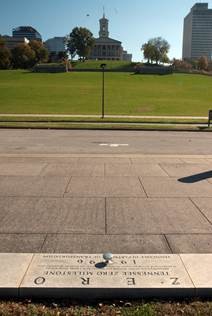 From the 1830’s-1850’s, toll roads or turnpikes were common throughout the country, including Tennessee. Private individuals or companies built roads and then charged a fee or toll to travel on them. Toll company employees often lived in houses along the road at the toll gate and collected the tolls or fees. After the 1850s toll roads and turnpikes became increasingly unpopular. In 1899 state law authorized counties to buy turnpikes from private companies and free the pikes from tolls. However the final nail in the coffin came in the Federal Aid Act of 1916, which prohibited the use of federal-aid for highway construction on roads with tolls. As a result the Tennessee State Highway Commission authorized county courts to remove the tolls and even institute condemnation proceedings if need be. The last toll road in Tennessee was the Nashville to Franklin Turnpike (present day State Route 6) freed in 1926.

In the early 1900s, when a highway job began, contractors hired their foremen and labor from nearby towns lodging workers in camps on the jobsite because commuting was impossible without cars and roads. Before mechanization, many laborers were required for manual labor. Tents and shacks were placed and a commissary was stocked with necessary items. Credit from purchases were deducted from wages. Paydays were happy occasions with peddlers appearing with merchandise and local farmers bringing in chickens, fresh meat, eggs and butter for purchase. 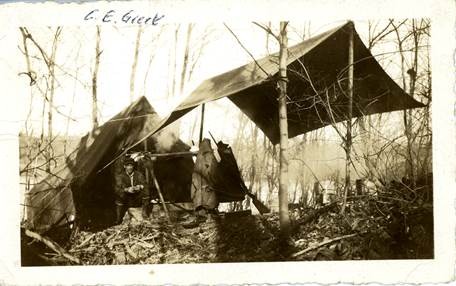 “As the engineer directs” was a deadly phrase to contractors in the early 1900s. During the early years, contract specifications were seldom clear or complete. That problem was typically remedied with contract clauses that said, “the work shall be done as directed by the engineer” and “the engineer’s decision is final and binding.” Contractors held the view they were always on the wrong side of the decision by the state engineer-inspector which often cost them more money than anticipated in the contract. Rumor had it that a west Tennessee engineer was so harsh in his inspections that contractors submitted bids on the condition 10 percent would be added if that state engineer inspected their work.

In 1919, the federal government began pro-rationing surplus equipment left from the war to counties and states. In 1923 as the highway department inaugurated the maintenance division, employees repaired, reconditioned and rebuilt the surplus equipment allowing the new division to get a good running start in maintaining the highway system. The below excerpt is from the 1923-1924 Annual Report of the Department of Highways and Public Works.

Because it was not built to federal standards, the first federal aid project proposed in Tennessee between St. Elmo and Lookout Creek in Hamilton County was cancelled after it was built for about $30,000 dollars.  Therefore, the first project in Tennessee paid for with federal aid was Route 16 in Franklin County between Cowan and Monteagle, Project #2.