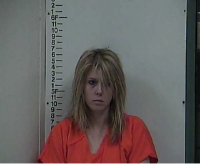 COOKEVILLE --- On March 05, Tennessee Highway Patrol (THP) Trooper Douglas Foster stopped a vehicle on I-40 in Putnam County for a traffic violation. As Trooper Foster interviewed the driver and passenger he noticed signs of deception from both. The female passenger gave a name and date of birth that came back not on file, making her true identity suspicious.

After an extensive investigation, it was determined Briggs had assumed the identity of another person. Briggs was wanted out of Fentress and Putnam County for fail to appear in court for original charges of theft, jail escape, aggravated assault, assault on an officer, and other offenses related to her escape from the Fentress County Sheriff’s Office jail in 2019. During that escape, Briggs stole a police car.

Briggs was arrested on felony warrants and felony identity theft.