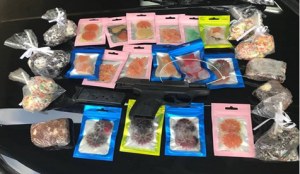 CHATTANOOGA--- On December 07, the Tennessee Highway Patrol (THP) issued a be on the lookout (BOLO) for a possible road rage incident involving shots fired on I-24 in Marion County. Interdiction Plus (IP) Trooper Donnie Clark spotted the suspect vehicle on I-24 in Grundy County, and with assistance from other units, immediately conducted a traffic stop. Upon contact, troopers detected the odor of marijuana. THP Chattanooga district Trooper Jason Boles deployed his K-9 around the vehicle resulting in a positive alert. A probable cause search was conducted that revealed approximately 30 ounces of marijuana edibles along with a loaded 9mm pistol.

As troopers interviewed the driver, De’Corea A. Moody, 22 years of age, from Louisville, Kentucky, she admitted to being involved in the road rage incident. Additionally, Moody informed troopers that she fired at least three rounds at another vehicle to intimidate the driver. Moody was arrested and charged with felony aggravated assault, felony possession of a schedule six drug, and felony possession of a weapon during commission of a felony. She was transported to the Marion County Jail for booking. No injuries were reported during the initial road rage incident and shooting.