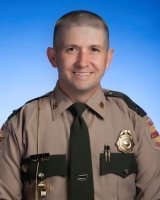 NASHVILLE- The Tennessee Department of Safety and Homeland Security (TDOSHS) is proud to announce Lieutenant Travis Plotzer as the department’s selection for the Governor’s Excellence in Service Award for Spring 2019.  The Governor’s Excellence in Service Awards began in 2016 recognizing outstanding state employees who are at the forefront of improving the way Tennessee State Government delivers services.

Lieutenant Plotzer joined the Tennessee Highway Patrol in 2005, assigned to Dickson County.  In 2013, he was promoted to Sergeant, assigned to the Nashville District Special Programs Unit.  His unit was responsible for inspecting school buses and daycare vans, conducting school bus driver in-service training and presenting traffic safety programs to community organizations and area schools. In 2017, he was promoted to Lieutenant and currently serves as the supervisor for Cheatham, Dickson and Humphreys Counties.  He works diligently to maintain strong relationships with local, state and federal agencies, always ready to assist when requested.

In February of this year an unprecedented, historic amount of rain fell in parts of Dickson County.  The high-volume of rain created flash flooding in Dickson trapping several people in their vehicles.  Without hesitation, Lieutenant Plotzer assisted the Dickson County Sheriff’s Office, wading chest-deep raging water rescuing a group of people in a disabled vehicle.

Lieutenant Plotzer was recognized by Governor Bill Lee in this year’s State-of-the-State Address and by Hyundai of Cool Springs for his heroic actions.  He has been instrumental in so many other high-profile events, always working closely with local, state and federal authorities to ensure their investigations get completed.  His hard work and character exemplify the best of the Tennessee Highway Patrol.

Lieutenant Plotzer has an Associate’s Degree from Nashville State Community College.  He is a graduate of the John A. Gupton School of Mortuary Science, the Northwestern University School of Police Staff and Command and the Commissioner’s Leadership Academy.  He serves as a White Bluff City Councilman, a children’s court-appointed special advocate and is a member of the White Bluff Civitan Club.

A full list of winners can be found here, https://www.tn.gov/governor/about-bill-lee/governor-s-excellence-in-service-awards/2019-spring-recipients.html

The Tennessee Department of Safety and Homeland Security’s mission is to serve, secure, and protect the people of Tennessee.