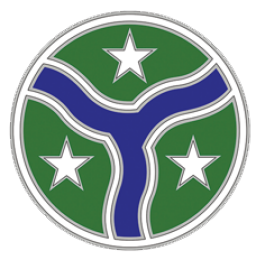 The 278th Armored Cavalry Regiment (ACR) is one of five Armored Brigade Combat Teams (ABCT) in the National Guard. The 278th ACR is also known as the “Tennessee Cavalry” and is Headquartered in Knoxville, Tennessee.

The Regiment's motto "I Volunteer, Sir" is taken from a time in Tennessee's past history. In 1846, a call went out for 2,800 Volunteers from the State of Tennessee to take part in the War with Mexico. 38,000 Tennesseans answered the call earning the Tennessee Militia the ever-lasting nickname of "Volunteers." Because there were so many volunteers willing to fight, a special lottery was held to select those men who would be allowed to fight. From this heritage, the 278th Armored Cavalry Regiment's motto "I Volunteer Sir" was derived.

The 278th Regimental Shoulder Patch was derived using the green color traditionally associated with Cavalry and Armor. The three white stars are adapted from the flag of the State of Tennessee. The blue divisions allude to the Tennessee, Houlston, and French Broad Rivers, environs of the Regiment. The white border accents the division between the colors.