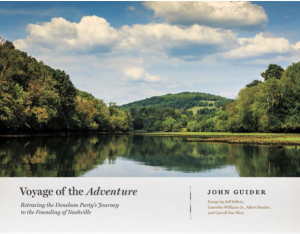 Voyage of the Adventure: Retracing the Donelson Party’s Journey to the Founding of Nashville by John Guider is a photo book that contains more than 120 images from the course of the journey that ended in the founding of Nashville. In the fall of 2016, Guider an award-winning photographer and author, retraced John Donelson and his party’s journey in his hand-built motorless rowing sailboat while making a visual documentation of the river as it currently exists.  Jeff Sellers, the Director of Education & Community Engagement with the Tennessee State Museum wrote the foreword; Learotha Williams, a professor of history at Tennessee State University and coordinator of the North Nashville Project, contributed the chapter on “Black Faces Along the Cumberland River Basin;” Albert Binder, Cherokee activist, historian, political columnist, and reporter, wrote about the “Cherokee Perspective on the Founding of Nashville and the Late Eighteenth Century;” and Carroll Van West, State Historian, and Director of the Center for Historic Preservation at Middle Tennessee State University, contributed the essay “Modern Times for the Tennessee and Cumberland Rivers.” These essays direct the reader’s attention toward heretofore disregarded narratives inclusive of the Cherokee whom the explorer encountered and the enslaved who had no discretion and therefore forced in making the journey. Additionally, West’s essay conveys how the rivers of the 18th century were different from the waterways of the 19th century and how by the 1830s, the Cherokee were being ferried to the west as a part of the Indian Removal. Guider’s photographs taken along Donaldson’s route gives the reader an illustration of settlement narrative. They, along with the essays, offer a different and newer viewpoint that includes and gives voice to those often neglected and relegated to an almost nondescript role in the mainstream chronicle. This volume utilizes the lesser-known experiences of Native Americans and enslaved African Americans, some of whom did not survive the river journey that led to the founding of what is now known as Nashville, a space fraught with horror that they endured and learned how to navigate. This work should be of interest to those wanting a more inclusive narrative about the founding of the “It City.” Hardback, 34.95, Paper, 24.95 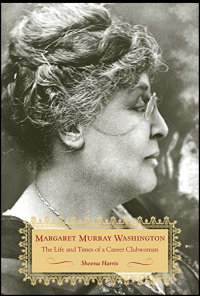 Margaret Murray Washington: The Life and Times of a Career Clubwoman by Sheena Harris is the first biography of the third wife of Booker T. Washington. The historical accounts of Washington, twice-widowed, are well known as an educator and reformer; the first president and principal developer of Tuskegee Normal and Industrial Institute, now Tuskegee University; and the most influential spokesman for African Americans between 1895 and 1915. Born enslaved at the onset of America’s Civil War, Margaret “Maggie” James Murray was born on March 9, 1861, in Macon, Mississippi, to enslaved Lucy Murray and her white Irish father, James Murray—less than four years after the infamous 1857 Dred Scott Supreme Court decision that legalized African Americans exclusion from first-class citizenship, an exclusion that became synonymous with blackness and extended to the 1896 Plessy v. Ferguson decision that judged African Americans separate and unequal. Twenty years after her birth, Margaret Murray entered Fisk University, where she befriended fellow classmate W. E. B. DuBois, with whom she served as an investigative journalist and editor for the Fisk Herald. Washington’s education and academic preparation at Nashville’s Fisk University facilitated her position as a principal leader of African American Women that provided her with an education directly associated with and by the “new black elite.” Three years after being graduated in 1889, on October 12, 1892, Margaret “Maggie” James Murray married Booker T. Washington. Although married to the most influential African American, Margaret Washington became a powerful and important woman in her own right. An educational reformer, an active founder and clubwoman, Washington improved Tuskegee Institute, co-founded the National Federation of Afro-American Women (1895) and the National Association of Colored Women (1896), which held its first national meeting in Nashville during the city’s Centennial Celebration. Davis, an associate professor of history at Tuskegee University, has added to the scholarship by bringing the leadership of this African American woman to the forefront, in a field of study that is beginning to identify and recognize African American women and their leadership skills. Margaret Murray Washington: The Life and Times of a Career Clubwoman presents this understudied race woman and the inside workings of the club movement among African American women and places Washington within the group of noted and respected women of the era like Ida B. Wells, Mary Church Terrell, Nettie Napier and others. Hardback, $55.00.