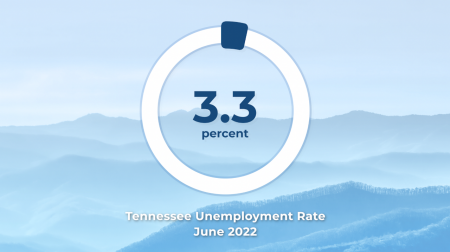 NASHVILLE – The rate at which people looked for new jobs across Tennessee held steady in June, according to newly released data from the Department of Labor and Workforce Development (TDLWD). The latest statistics also showed more people were on the job across the state in June compared to any other month on record.

Tennessee’s seasonally adjusted unemployment rate for June 2022 came in at 3.3%, which mirrored the rate from May. One year ago, the rate was 1.1 percentage points higher than the latest number.

Employers across the state added 32,300 new nonfarm jobs to their payrolls between May and June. The local government sector saw the largest increase in new hires. The finance and insurance and the educational services sectors experienced the next largest increases.

In a year-to-year comparison, nonfarm employment in Tennessee grew by 130,600 jobs.  The leisure and hospitality sector, trade, transportation, and utilities sector, and professional and business services sector saw the most growth over the last year.

Tennessee’s civilian workforce jumped from 3,405,540 in May to 3,413,449 in June. That marked the largest civilian workforce since the state started tracking the statistic. The new numbers increased the state’s labor force participation rate from 61.1% to 61.2%.

The seasonally adjusted unemployment rate for the United States also held steady in June at 3.6% when compared to May’s revised number. One year ago, the national rate was 5.9%,

While unemployment continues to remain low across the state, TDLWD offers many different resources to Tennesseans who are looking to find meaningful employment. www.TNWorkReady.com lists the various online and in-person services available to job seekers.  From the virtual American Job Center, which is open 24/7, to www.Jobs4TN.gov, which has a database of over 400,000 jobs, TDLWD is ready to help Tennesseans find their next great job.

The state of Tennessee will release new data covering each of the state’s 95 counties, including micropolitan and metropolitan statistics, at 1:30 p.m. CDT on Thursday, July 28, 2022.