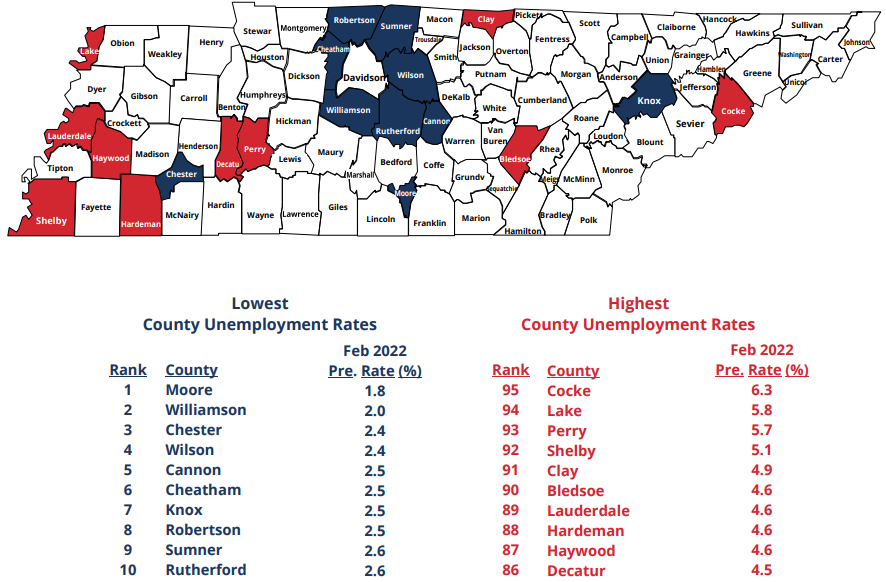 NASHVILLE – Unemployment rates dropped in counties across Tennessee in February, according to new data released by the Department of Labor and Workforce Development (TDLWD). Each of the state’s 95 counties saw lower unemployment during the second month of 2022.

Ninety-one counties recorded a rate of less than 5% for February, while four counties had unemployment higher than 5%, but less than 10%, during the month.

When calculating county unemployment rates, seasonal impacts are not factored into the rates, while the statewide unemployment data is adjusted for those occurrences.

Tennessee’s seasonally adjusted unemployment rate for February was 3.4%, a 0.1 of a percentage point drop from January’s rate of 3.5%. The new figure came in 1.6 percentage points lower than the 2021 rate of 5%.

The United States unemployment rate also dropped slightly in February. The nationwide seasonally adjusted rate inched down by 0.2 of a percentage point to 3.8%. One year ago, the national jobless rate was 6.2%.

Analysis of the February county unemployment numbers for each county, including labor force estimates for areas across the state, can be found here.

TDLWD has many resources available to help individuals navigate the thousands of open jobs in and around Tennessee, as well as locate opportunities to improve skill sets or learn new, in-demand skills. Job seekers can find those resources in-person at an American Job Center, or online at www.TNWorkReady.com.