Tennessee Counties Start 2022 with an uptick in Unemployment 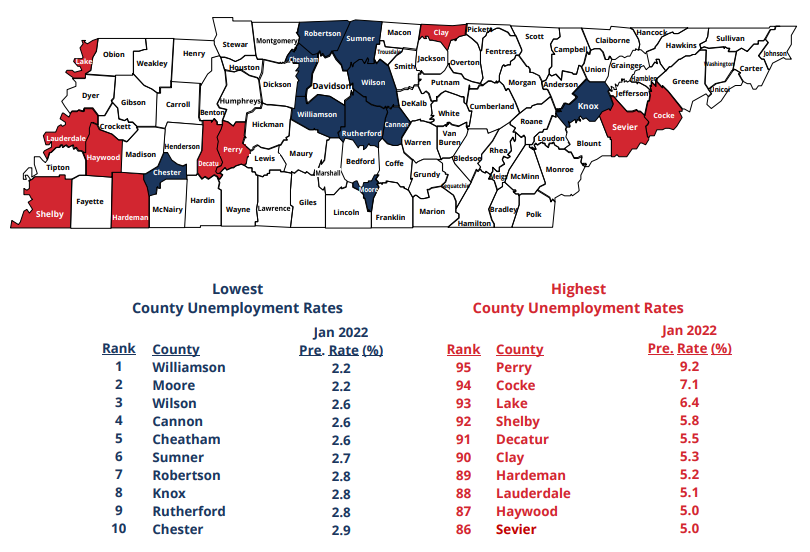 Each of Tennessee’s 95 counties experienced an increase in unemployment during January, according to new data released by the Department of Labor and Workforce Development. Eighty-five counties reported rates less than 5%, while the remaining ten counties had rates of 5% or greater, but less than 10%.

At 9.2%, Perry County had the highest unemployment rate in the state. Its January number increased by 2 percentage points when compared to the revised December rate. Cocke County had Tennessee's second-highest rate for the month. The new figure of 7.1% marked a 2.3 percentage point increase from December.

Statewide, January’s seasonally adjusted unemployment rate of 3.5% was the lowest it has been since November 2019. It was down 0.1 of a percentage point from December’s revised rate of 3.6%.

Across the nation, seasonally adjusted unemployment for January increased slightly from 3.9% to 4%.

A complete analysis of the January 2022 county unemployment data is available here.

Tennessee has more than 100 American Job Centers across the state where job seekers can walk in and receive one-on-one help finding a job. From resume writing to skills training programs, career specialists can help individuals take advantage of all the services available to them.

Job seekers can also find a variety of services online. From a virtual American Job Center to information on adult education programs, it is all available at TNWorkReady.com.