Unemployment Drops Below 5% in Every Tennessee County 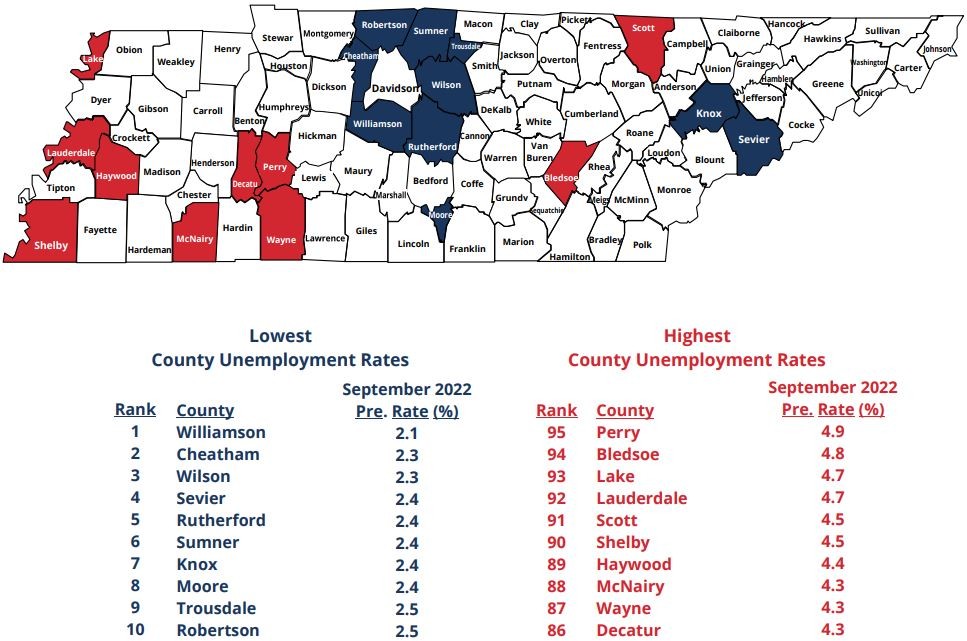 NASHVILLE – Every county in Tennessee recorded unemployment rates below 5% in September, according to the latest data from the Department of Labor and Workforce Development (TDLWD). September also marked the second consecutive month that rates decreased in each of the state’s 95 counties.

Williamson County continued to have the lowest rate in the state at 2.1%, which was down 0.2 of a percentage point from August’s rate of 2.3%.

Cheatham and Wilson counties each had a rate of 2.3%, while the rates for Sevier, Rutherford, Sumner, Knox, and Moore counties all came in at 2.4%.

Perry County had the highest unemployment rate in September at 4.9%. But, that still marked a 0.7 of a percentage point decrease when compared to its rate for August.

The national seasonally adjusted unemployment rate dropped in September to 3.5%, down 0.2 of a percentage point in a month-to-month comparison.

County unemployment rates are not seasonally adjusted to account for different seasonal impacts on the workforce.

A complete analysis of the September 2022 county unemployment data for Tennessee is available here.

Job seekers can find all the resources and services they need to start their search, all in one place. TNWorkReady is the site where Tennesseans can find a new job, find programs to help them develop new skills, or find classes where adult learners can earn a high school equivalency diploma.