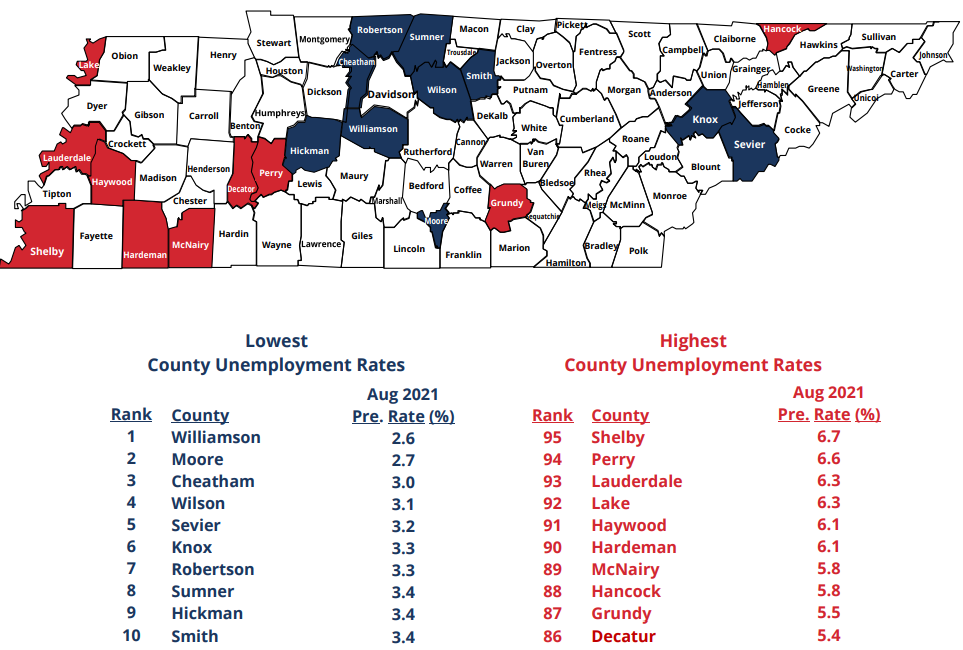 NASHVILLE – Unemployment rates in nearly all of Tennessee’s counties decreased in August. This marks the second consecutive month the jobless situation has improved in 93 or more of the state’s 95 counties.

August unemployment rates were lower in 93 counties across the state. The rate in Williamson County remained unchanged from July at 2.6%. Unemployment increased in Maury County from 4.2% to 4.5% in a month-to-month comparison.

Seventy-nine counties recorded unemployment rates of less than 5% for the month. The remaining 16 counties had August rates of 5% or greater, but less than 10%.

Williamson County continued to have Tennessee’s lowest unemployment rate in August. Moore County recorded the second-lowest rate at 2.7%, which was down 0.2 of a percentage point from its July rate.

Shelby County had the month’s highest unemployment rate at 6.7%. While it was the highest in the state, the county’s new rate represented a 0.8 of a percentage point decrease from July. Unemployment in Perry County was the second highest at 6.6%, but that accounted for a 4 percentage point drop from its July rate of 10.6%.

Unemployment statewide improved for the third consecutive month in August. The rate ticked down from 4.7% to 4.6%.

Nationally, the jobless rate also improved in August. It decreased by 0.2 of a percentage point from 5.4% to 5.2%.

A complete analysis of the August 2021 county unemployment data can be found here.

This week, there are more than 470,000 open positions across Tennessee. The state is working to help unemployed Tennesseans become TN Work Ready, so they can successfully rejoin the workforce. Job seekers can find a multitude of online and in-person resources by visiting www.TNWorkReady.com.

Tennessee will release the statewide unemployment rate for September on Thursday, Oct. 21, 2021, at 1:30 p.m. CDT.