Unemployment Typically Spikes in June Because Rates Are Not Seasonally Adjusted 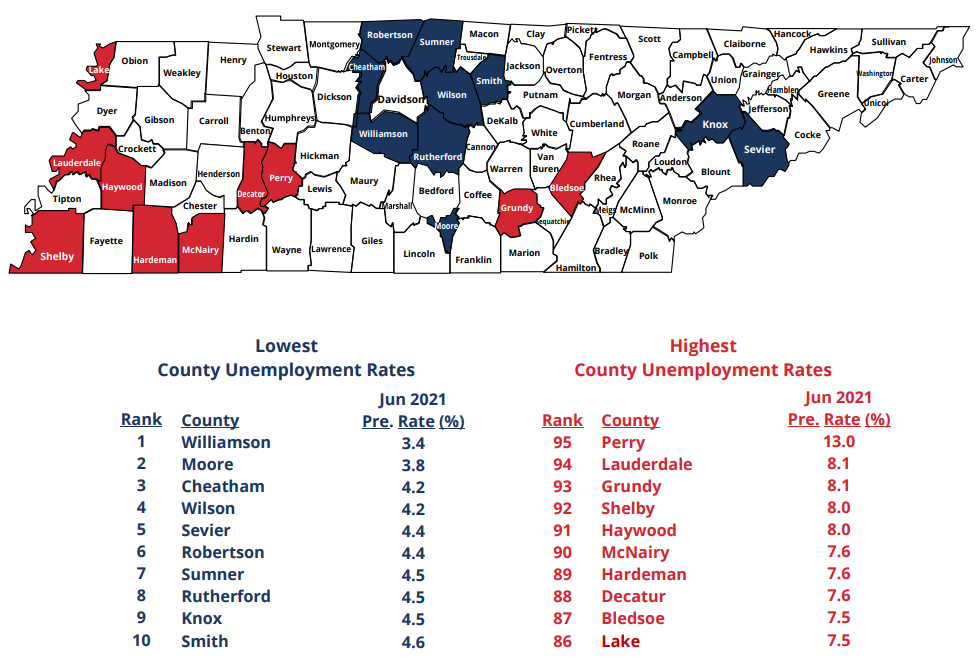 NASHVILLE – Each June, Tennessee counties experience an increase in unemployment as schools close for summer break and lay off workers. Recent college graduates entering the workforce for the first time also impact the data each year. Once again this June, data from the Tennessee Department of Labor and Workforce Development (TDLWD) showed jobless rates increased in each of the state’s 95 counties.

While county rates increased in June, the statewide rate ticked down. This can occur because county unemployment rates are not seasonally adjusted, while the state and national rates use the seasonal adjustment to eliminate outside influences, such as school closures, on the statistics.

In June, unemployment rates were less than 5% in 19 Tennessee counties. Seventy-five counties had rates 5% or greater but less than 10%, and one county showed a rate higher than 10%.

Williamson County recorded the state’s lowest unemployment rate. At 3.4%, the county’s June rate increased 0.7 of a percentage point from the previous month.

Perry County’s rate jumped to 13% in June, a spike of 5.9 percentage points when compared to May’s rate.

Nationally, unemployment increased slightly in June from 5.8% to 5.9%. This rate is down 5.2 percentage points when compared to June 2020.

TDLWD has produced a complete analysis of the county unemployment data, including the state’s larger cities, as well as the metro and micropolitan areas. That data can be accessed here.

The state has valuable resources available to help unemployed Tennesseans become TN Work Ready and reenter the workforce. They can visit www.TNWorkReady.com to find online and in-person assistance with their job search.