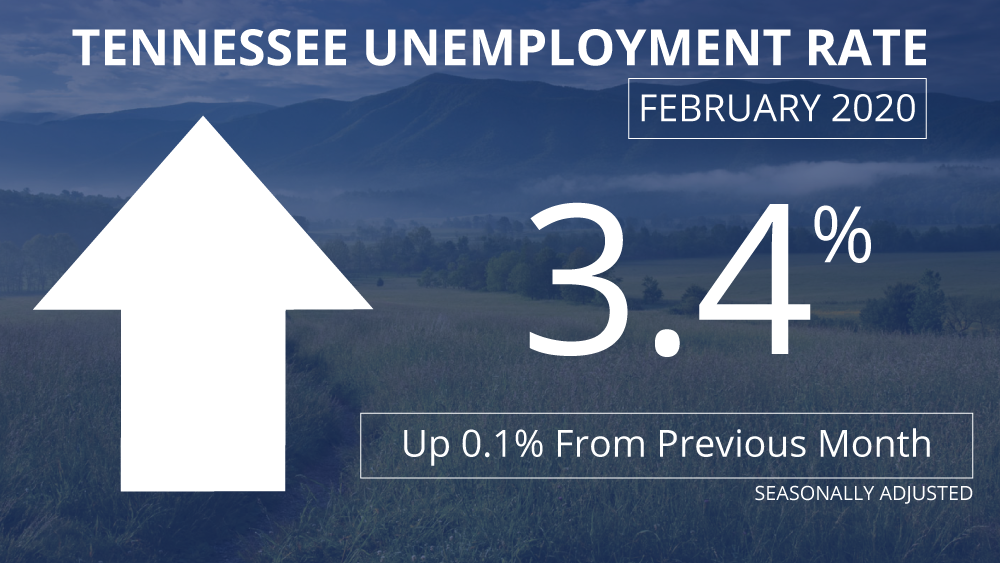 NASHVILLE – Unemployment rates are a lagging measure and for the month of February remained relatively unaffected by the COVID-19 public health emergency. Tennessee’s statewide unemployment rate for February 2020 experienced a slight increase according to newly released data from the Tennessee Department of Labor and Workforce Development.

The seasonally adjusted unemployment rate for February is 3.4%, which represents a 0.1 of a percentage point increase when comparing the new statistic to January’s revised rate of 3.3%. The current rate mirrors the number from one year ago.

Tennessee’s all-time low unemployment rate is 3.3%. The rate remained at that historic level for five consecutive months leading up to February.

Total nonfarm employment in Tennessee increased by 4,800 jobs between January and February. The largest increases occurred in the health care/social assistance, transportation/warehousing/utilities, and professional/scientific/technical services sectors.

Over the last year, nonfarm employment statewide increased by 51,000 jobs. During the previous 12 months, Tennessee saw significant increases in the trade/transportation/utilities, leisure/hospitality, and education/health services sectors.

The state of Tennessee will release the February county unemployment rates at 1:30 p.m. CT Thursday, April 16, 2020.