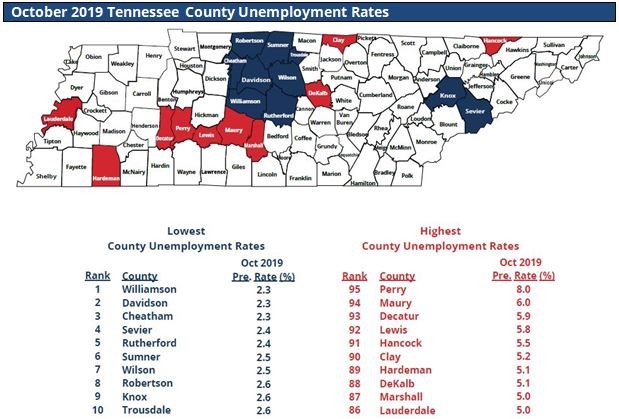 NASHVILLE – Newly released data from the Tennessee Department of Labor and Workforce Development (TDLWD) shows 38 counties experienced a drop in unemployment during October, while rates remained the same in 24 counties, and increased in 33 counties.

Williamson County's statistic of 2.3 percent mirrored its previous month's rate. Davidson and Cheatham counties also had a rate of 2.3 percent in October, both down by 0.1 of a percentage point from September's number.

During most of October, employees at the General Motors manufacturing facility in Spring Hill, along with workers at several dozen automotive suppliers in surrounding counties, were not working.

In Maury County, unemployment more than doubled, causing the county to have the second-highest rate in the state. It spiked 3.4 percentage points, going from 2.6 in September to 6 percent in October.

Other counties in Southern Middle Tennessee also experienced a jump in unemployment.

Perry County had the state's highest unemployment rate in October at 8 percent. That represents a 4.5 percentage point increase from the prior month's rate of 3.5 percent.

"Many different factors impact a county's employment situation," said TDLWD Commissioner Jeff McCord. "The vast majority of Tennessee's counties had continued low unemployment in October. The ebb and flow of the statistics in several areas will likely return to more typical numbers in the coming months."

Nationally, unemployment experienced a slight uptick. October's rate of 3.6 percent is 0.1 of a percentage point higher than September's rate of 3.5 percent.

A complete analysis of the October 2019 county unemployment rates and labor force estimates is available in a report you can access through this link.

The statewide unemployment rate for November will be available Thursday, December 19, 2019, at 1:30 p.m. CT.