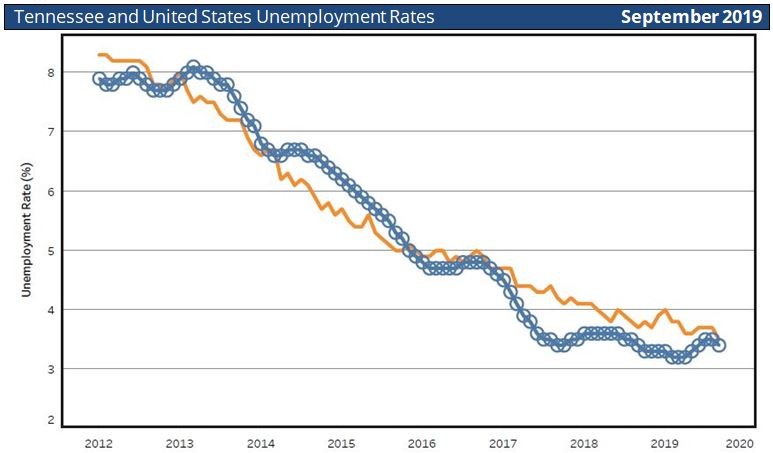 NASHVILLE – Newly released information from the Tennessee Department of Labor and Workforce Development shows lower unemployment across the state in September.  The seasonally adjusted rate of 3.4 percent is 0.1 of a percentage point lower than the revised August rate of 3.5 percent.

In a year-to-year comparison, Tennessee's statewide unemployment rate mirrored the rate from September 2018.

Total nonfarm employment increases 3,700 jobs between August and September. The largest increases occurred in the leisure/hospitality sector, followed by the professional/business services, and other services sectors.

Over the last year, nonfarm employment across Tennessee increased by 48,200 jobs. The leisure/hospitality sector experienced the largest increase, with the professional/business services, and manufacturing sectors seeing the next largest increases in new jobs.

The statewide unemployment rate is seasonally adjusted to eliminate the influences of weather, holidays,  the opening and closing of schools, and other recurring seasonal events from an economic time series.

A complete analysis of Tennessee's unemployment data for September 2019 can be found here.