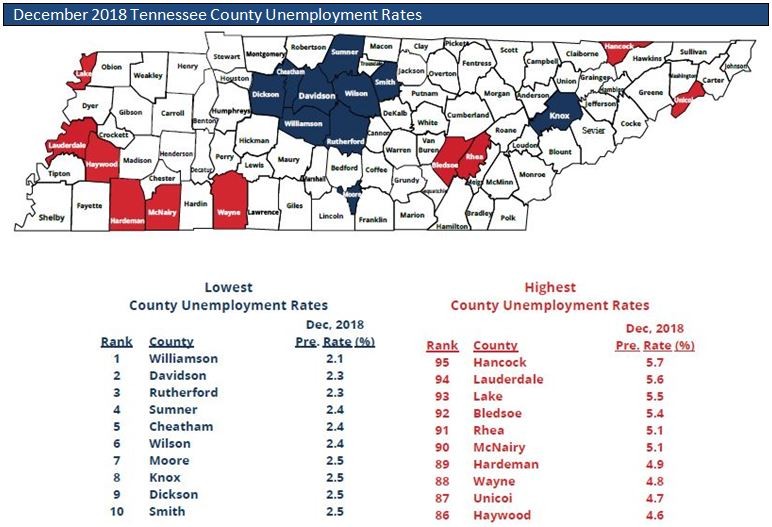 NASHVILLE– More than three-quarters of Tennessee’s 95 counties experienced a drop in unemployment during December 2018 according to data released today by Gov. Bill Lee and Tennessee Department of Labor and Workforce Development Commissioner Dr. Jeff McCord.

Seventy-six counties saw a decrease in unemployment in December; the rate remained unchanged in three counties, and 16 counties experienced an uptick in their jobless numbers.

Williamson County continued to have the state's lowest unemployment during the final month of 2018 with a rate of 2.1 percent. Compared to the previous month, Williamson's rate dropped by 0.4 of a percentage point in December. The County's unemployment rate has been at or below 2.1 percent in 61 prior months dating back to 1990.

Davidson and Rutherford counties had the next lowest unemployment rates at 2.3 percent each. Both counties saw a decrease of 0.3 of a percentage point from their November rates.

"To finish 2018 with low unemployment in so many counties shows just how strong Tennessee's economy is as we start the new year," said Lee. "Much of our state continues to benefit from a business climate that encourages growth, which in turn leads to new jobs."

While the majority of Tennessee's counties did see a drop in unemployment in December, many rural counties continue to work to attract new employment opportunities and training resources for their residents.

Hancock County had the state's highest unemployment rate at 5.7 percent, which increased by 1.1 percent from November's figure.

Lauderdale County had the second highest unemployment rate, but at 5.6 percent, it did drop 0.2 of a percentage point when compared to the previous month.

"We continue to work in Tennessee's rural counties to help our neighbors find a pathway to in-demand careers, said Dr. McCord. "In Hancock County, we've partnered with the Department of Economic and Community Development, the area's TCAT and the local school district to bring technical training classes to the community, so residents don't have to travel to Morristown to learn a new trade."

Statewide, Tennessee's December unemployment rate remained at 3.6 percent for the second consecutive month. Nationally, the United States' unemployment rate saw an uptick to 3.9 percent, which was 0.2 of a percentage point higher than in November.

The December 2018 unemployment data for each of Tennessee's counties can be found here.

Tennesseans searching for a new job can access the state's workforce development website where they will find a wide range of helpful information and services, including a virtual job recruiter.